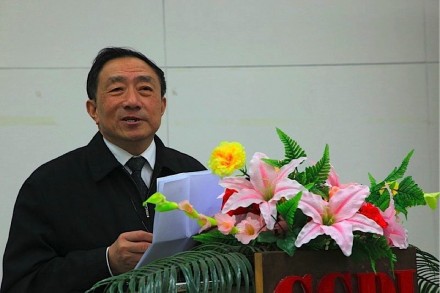 (April 2012) The China Stone Material Association is a nation-wide stone trade organization. 1000 companies ranging from producers to manufacturers and traders are its members. Membership is voluntary. President is Zou Chuansheng. Stone-Ideas.com’s Peter Becker was granted an interview during the fair in Xiamen.

Stone-Ideas.com: How was 2011 for the Chinese stone industry?

Stone-Ideas.com: Which are the main topics for 2012?

Zou Chuansheng: ‚Green’ production is the main topic. In 2010, we had started to elaborate on draft of Standards on Clean Production that will give the companies orientation to reach this goal. The draft was finished in 2011 and is now with the government authorities for approval. We hope that could be approved and implemented in 2012.

Stone-Ideas.com: Could you please name us a few of these standards?

Zou Chuansheng: Let’s await the government’s approval. Then I will be glad to inform you about the final decisions.

Stone-Ideas.com: Would you mind to give us a hint?

Zou Chuansheng: In the first place of the standards will be dust reduction inside and outside the workshop. Also on top are the reduction and the treatment of waste and noise. Generally spoken, the core problem is questions of management rather than technical improvement, so how the companies adjust their production. It is finally up to a firm how it reaches the goal.

Stone-Ideas.com: In our last year’s talk, you had said that the lack of skilled workers makes live difficult for the Chinese stone industry. What is the current situation?

Zou Chuansheng: Our association organizes training programs for the companies, especially in the industrial clusters. These qualifications are listed in the National Occupation Classification. That means that workers have to have this level of knowledge and know-how. All workers are required to obtain professional qualification step by step. But, very much still has to be done in this field.

Stone-Ideas.com: We heard that the government closed down smaller companies who were quarrying stone without license. Is that true, and in how far does it effect the prices?

Zou Chuansheng: Of course it is true. These quarries were exploited illegally! If those companies could manage to get licenses they might be allowed to restart their work. The action was little relevant to the prices. There are sufficient substitutes.

Zou Chuansheng: We are entrusted to define the conditions for new company foundations. The higher standards will be applied to them from their very beginning.

Stone-Ideas.com: Which are your expectations in respect of the 2012 business volume of the sector?

Zou Chuansheng: The situation is not very positive. As to international trade, though there are signs for a recovery on our main market, the US, these sign are still fragile. The markets in the European Union are weak, too. So there are many uncertainties. I hope that finally the efforts of our companies will bring success.