Art: Citizens, to the mosaics! 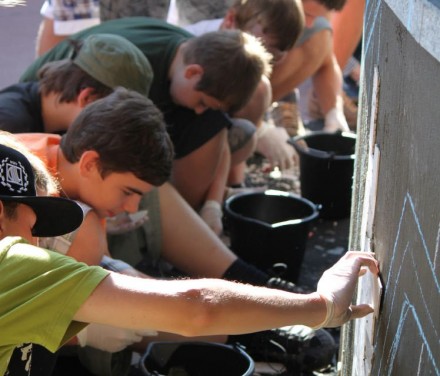 (January 2013) Poland’s city of Krakow effectively demonstrated how to move citizens with the aid of natural stone. The secret recipe: take one dedicated artist, one enthusiastic local politician, a handful of sponsors and some 1000 or more participants; allow all ingredients to boil at maximum heat for a few days… 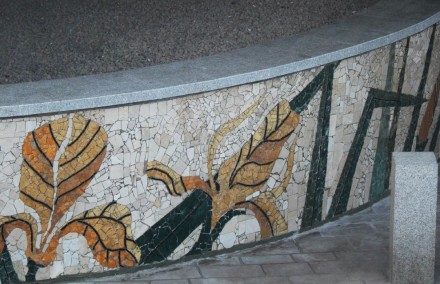 … and voilà: in the end, a morbid concrete wall carries a lovely floral mosaic. 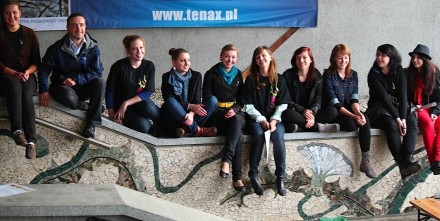 And if on the 4th and planned final day of the event there is nothing left to do because of the high participation… throw a party for the participants!

Taking a step back: much traffic rumbles over historic city center’s roundabout Rondo Mogilskie. So the pedestrians are banned to a level below ground out of harm’s way which in turn means that they must navigate long stretches down stairs and along concrete walls before reaching their destination on the other side.

By coincidence mosaic artist Lubosz Karwat met Margaret Jantos, one of Krakow’s local politicians early 2012. They soon converged and agreed to make one of the 22 m long cement walls more attractive for passersby.

In agreement with city planners the idea was given a local touch: the floral motif should reflect works of Krakow’s Stanisław Wyspiański (1869-1907) which he brought back to his place of birth after spending some time in Paris. This was the Art-Nouveau-period, and Wyspiański designed a number of stained glass windows in the style of the times in Krakow’s churches before his death. 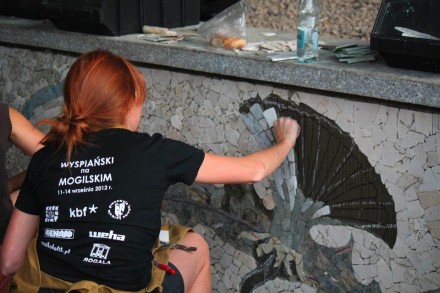 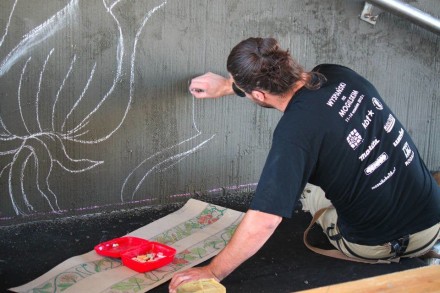 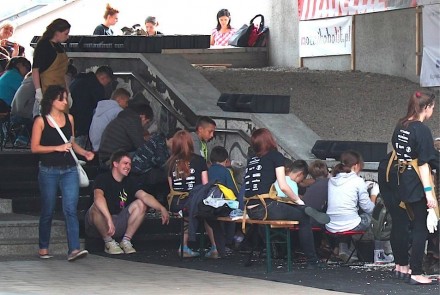 … a run set in on Rondo Mogilskie: everybody from pupils to managers in fine business suits wanted to try their hand at mosaic. Even pensioners who notoriously suffer from a lack of time were animated by the myriad of helping hands to participate themselves.

Those who wished to stay only for a short while could apply a few pieces on the large surface. Those striving for a more intense form of participation were given detailed information and challenged by the floral pattern. „The result was that the pattern varies greatly along its 22 m length“, according to Karwat.

The effort was a raging success. So much so, in fact, that another event has already been planned for May of this year. „There are lots of drab surfaces“ comments Karwat.

Last but not least let us mention the sponsors: Rogala Company supplied the about 30 different types of stone; Weha, Granex and Makita companies contributed tools, glasses and gloves; and Tenax, Atlas and Moazaikoholik.pl delivered the needed chemical components such as primer and adhesives. The event was integrated in Krakow’s Art Festival. 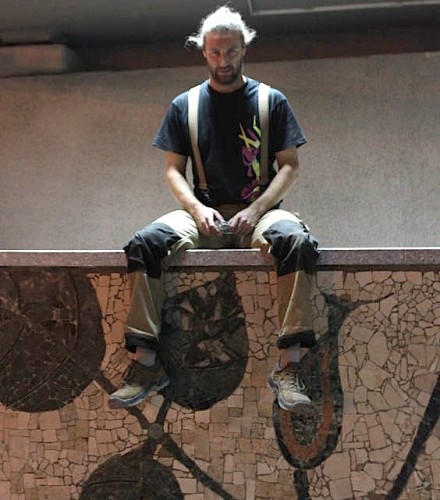