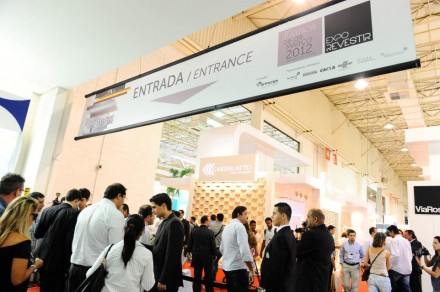 Update: Kengo Kuma’s and Il Casone’s „Stonescape“ will be presented at stand 3065 (see thumbnail below).

(February 2013) Brazil’s Expo Revestir will be taking place for the 11th time in the megalopolis of São Paulo from March 5th to 8th 2013. It has become the most important marketplace for architecture and interior design in Latin America. The focus is on cladding – exterior and interior -, as the name says (revestir=coat).

The fair’s development mirrors the positive growth which Latin American markets are experiencing. The exhibit area is approx. 30% larger than in 2012 with a current total surface of 40,000 m², according to organizers. Some 45,000 visitors are expected this year from 60 countries. 240 exhibitors will be showing their wares, 50 of them from abroad.

Ceramics make up an important section of the product palate. Only a small number of exhibitors are producers of natural stone products. Engineered stone e.g. for kitchen counter tops, is also represented. Revestir’s distinguishing factor is that the ideas rather than the material e.g. for kitchens or bathrooms is the object of presentation.

Greater São Paulo has traditionally been considered the economic engine of Brazil. The province of the same name accounted for 45% of the domestic turnover in natural stone according to an Abirochas report.

Parallel to the trade fair the International Forum for Architecture and Building will be taking place in the same venue.