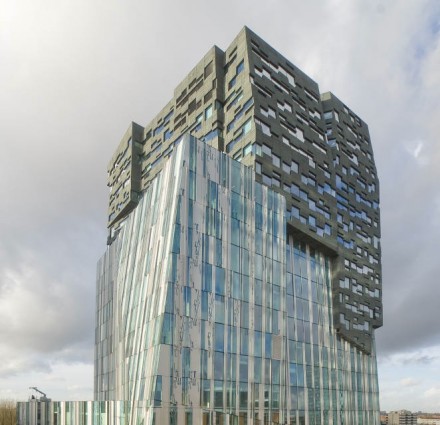 (February 2013) One of Amsterdam’s office high-rise sets a fundamental law of nature topsy turvy: namely that the greatest mass must be closest to ground level. As far as the façade is concerned „The Rock“ seems to stubbornly defy this principle: the remarkable 94 m-high construction carries its glazing and aluminum siding near ground level and stone cladding aloof near the top.

Dutch Erick van Egeraat Architects simultaneously pursue several goals here: one is to allow a maximum of daylight to infiltrate the lower floors. Another is to lend an impression of solidity with the help of stone cladding from the 15th floor upwards. 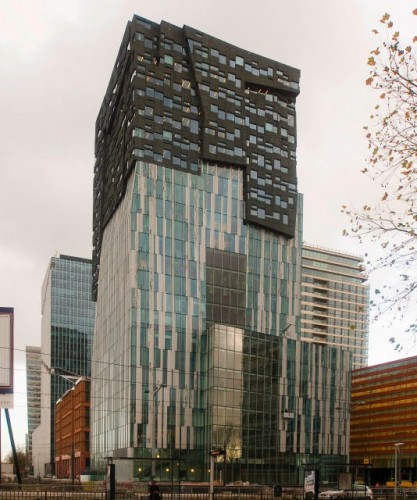 Also: the building’s unique appearance distinguishes it from others – a built-in marketing scheme. Architect Harry Kurzhals describes the concept as „Rock on Ice“:„These days many office buildings are a repetitive addition of the same office cells and made of glass.“ Not so here. 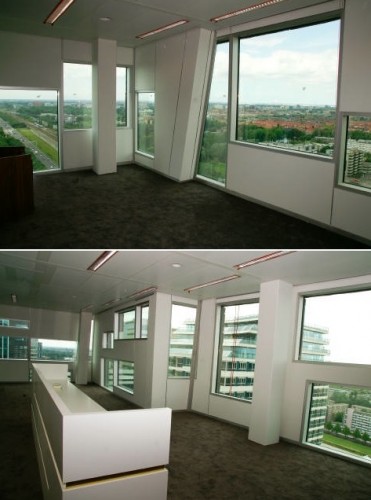 Tenants should be able to localize their office from outside the building.

But Mother Nature is not easily defied. A novel façade concept was needed. The architects used an embedded split covering instead of the usual stone slabs. Serpentino Verde was the split of choice, stemming from Italy’s Valtellina Valley near Como. 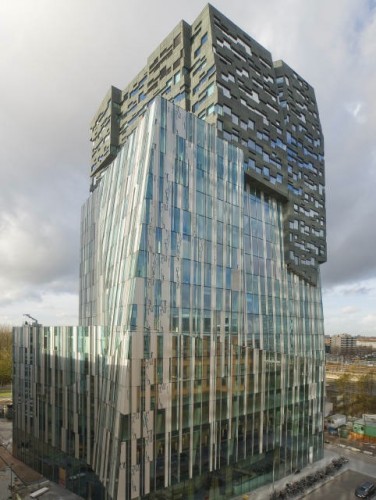 Nomen est omen – no doubt about that. It could be compared to a monolith as found in some national parks: The building’s façade bears a type of bulge near the ground floor. The interaction of aluminum and printed glass are distinguishing factors and make the building’s appearance unique. 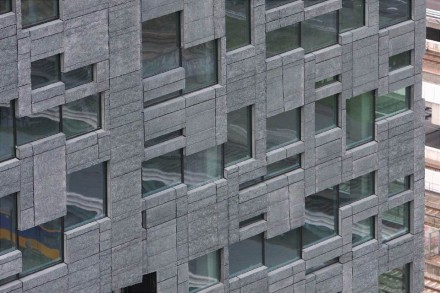 The top part of the building can be compared to a jagged alpine cliff. Plates covered in a range of types of split from a range of granulation, to rough, to honed, emulate the effects of weathering. Protuberances and jutting edges complete the picture. 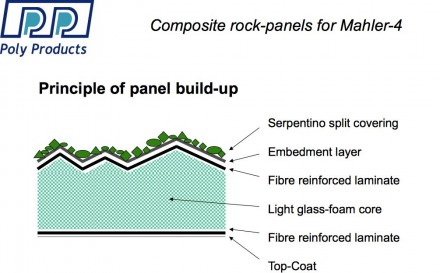 The heart of the façade plates is foam glass upon which a layer of split is affixed. A number of layers in between with various functions complement the construction.

The Composite-Relief-Sandwich (CRS) was developed and produced by Polyproducts Company under the guidance of technical director Dr. Albert ten Busschen. The plates were mounted by Scheldebouw, a subsidiary of Permasteelisa Central Europe (PCE) of Italy. Bert Schlösser was responsible for the project.

The aim of the unusual choice of materials and realization as a sandwich was not only light weight (30 kg/m²). Durability and ability to withstand weathering, damage by exposure to high winds and fire were all criteria to be met.

Tests took some 18 months and were carried out in a range of laboratories, among others in the British Research Institute (BRE). The manufacturer’s product comes with a 10-year warranty. He predicts a life-expectancy of 60 – 100 years. 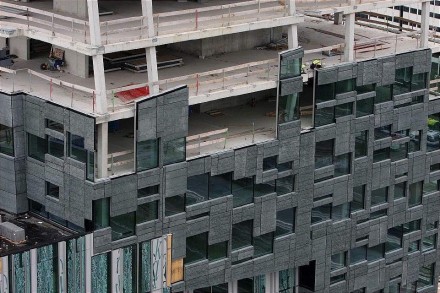 The elements were mounted as pre-fabricated plates. Some 7,500 m² of these split-covered plates were produced.

The entrance of the building is covered with real stone slabs in a variety of exclusive stone types, supplied and mounted by Kolen Natuurseen Company.

The high-rise is situated in the middle of the Zuidas Development in the southern section of Amsterdam where a commercial district with dwellings and entertainment venues is ensuing. Nine international architects were invited to submit drafts for the segment „vibrating“ high-rises named after the composer Gustav Mahler according to a description. Hence „The Rock‘s“ nickname: „Mahler 4“.