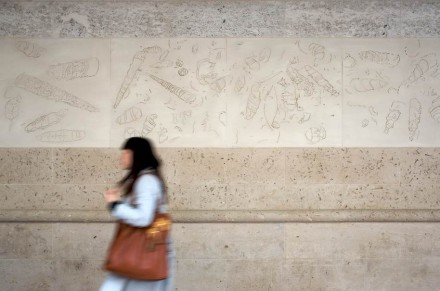 (May 2013) It was 150 years ago on January 10th 1863 to be precise, that the London „Tube“ first transported passengers across London. Trains were pulled by steam engines back then. Time for a flashback on Station Green Park where artist John Maine made time and people as well as geology a central theme of his work. The noteworthy décor at the station’s entrance incorporates 150 million-year-old fossils which ensued from crustacean, gastropod and bivalves sediments over the ages. For his work, the artist was awarded one of the 2012 Stone Federation Great Britain prizes.

We are talking about Portland limestone. For centuries it has been the stone of choice for representative buildings in the capital city of Great Britain. 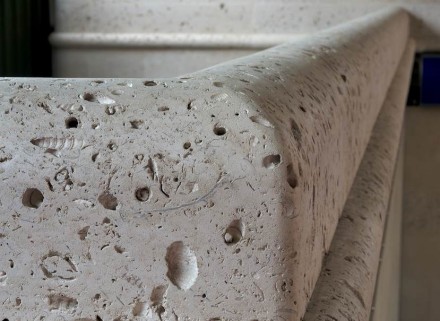 A special variety of the stone is Portland Roach: in it imprints of marine wildlife are preserved – not only in small portions. 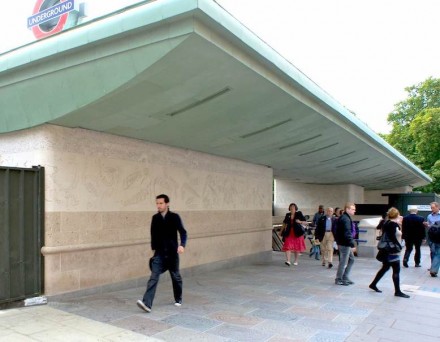 John Maine, member of the Royal Academy of Arts, was inspired by the spiral gastropods which he transposed to his „Sea Strata“ project. Commuters entering or leaving the Green Park underground station can admire the artist’s interpretation of the structures worked into stone. The Portland limestone used here has no fossil structure of its own.

Above the band which runs horizontally at eye-level, other varieties of the stone with fossil structures or imprints of their own were used. The bands reflect the sedimentary layers typical of sedimentary facies.

The edges are rounded, as sharp edges do not appear naturally, or if they do, they do not remain sharp for long. The rounded edges also emphasize the stone’s massive structure optically. 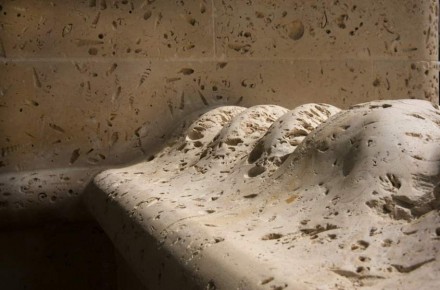 The station’s low walls have a wave-like flush-work at the top reflecting the oceans from whence the animals came. 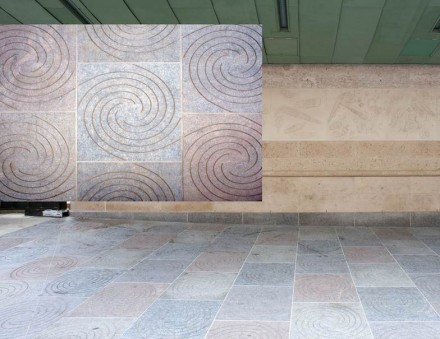 Movement in the water is also projected on the floor where eddies are reflected in stone. They are meant to remind the beholder of the water reservoirs which existed there in the 18th century, a well-liked place for an afternoon stroll. The stone used for flooring and plinth is Kemnay granite from Scotland.

We were delighted by the artistic idea and found the impressions at night glowing with neon light most fascinating, almost surreal. Photos can be seen in a blog (see below). But we were surprised at the comment about „onion rings and orange peels on the walls“.

Obviously some do not know much about natural stone and its provenance.

London‘s „Tube“ was the first ever underground train. It has a railway network of some 402 km with 270 stations and 11 lines. Some 3.7 million passengers use it every day.

Since the beginning of the 20th century the „Art on the Underground“-program has been sponsoring artists like John Maine for their work on London’s underground stations, here in particular Green Park station.

Transport for London, Art on the Underground