Once an artist, always an artist 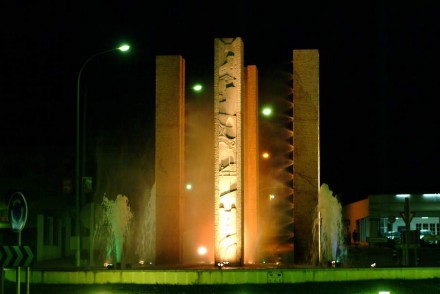 (July 2013) Let us take a moment to philosophize about Creatures Great and Small and God Above: the question is: is it easier for a person to go his way if he knows from the very beginning, where the road will take him? Or is it perhaps even more difficult for him than for someone who can take whatever comes his way?

Jose Luis Hinchado knew since the age of 9 what he wanted to be when he grew up: „He read a book on the works of Michelangelo and decided right there and then that he had to be a sculptor“, writes his wife Elena Yushkova.

That, in itself, is nothing special: all children have dreams. Some see themselves as firemen, or locomotive engineers, or, still very popular, princess.

This is why good parents let their children dream. So Jose Luis’ parents sent their son to an artist group where children learn to paint, practice theatrical endeavors or sculpt.

The parents had a private art collection.

They also had the best restaurant in all of Badajoz, and when their son decided to study art, they were no longer so enthusiastic. 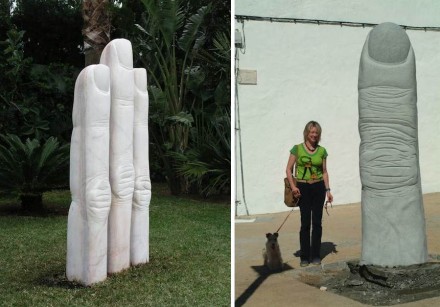 When the Russian Elena and Jose Luis met in Spain, she writes, he told her „even if he hadn’t money for food he would go to the mountains, find a stone and work on it“. „I accepted“ she adds.

Last year Jose Luis was accepted as a full academic member of the Royal Academy of Fine Arts of Granada. He spent the last 25 years working after having completed his fine arts decree majoring in sculpture and painting at the Arts Academy in Sevilla. 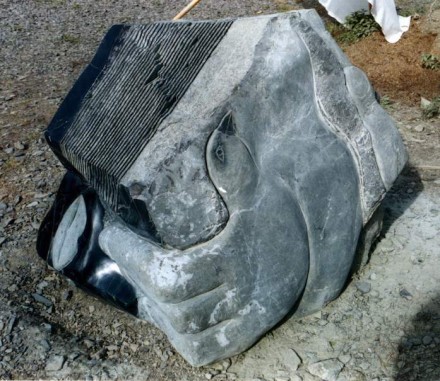 Natural stone plays a central role in his works. Sometimes he takes a raw block of stone and works it just a little bit, polishing here and there.

Sometimes he adds pieces of iron – a material with which he works alternately. Or he might let water flow over the rusty surface to see what it will do to the stone. Or he might saw lamellae into the stone turning the block into a musical instrument.

Currently he is experiencing a foible for monumental sculptures. One example is his piece by the name of „Quatro Caminos“ (Four paths) in Olivenza near the Portuguese border (see photo above). The preset was detailed: he was commissioned to sculpt fountain of friendship between Portugal and Spain at the crossroads of which the four major trade roads as well as characteristic regions were to emanate. 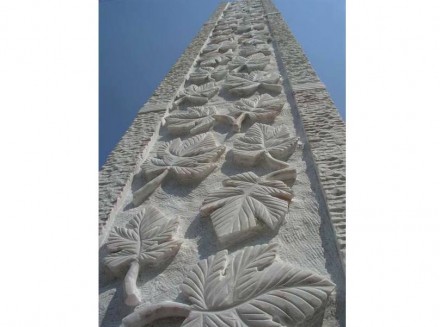 Jose Luis erected 4 pillars of marble each 6 m high each of which was made of 3 pieces. Jets of water create a wall of mist connecting them. The stone bears symbols from agriculture, elements of Arabic art as well as significant local buildings. 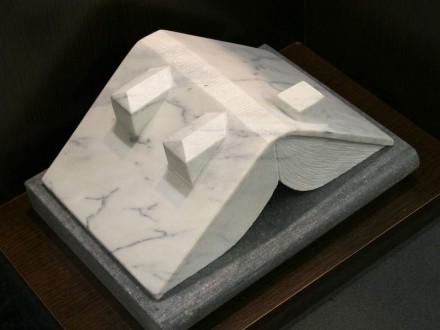 In one of his most recent pieces, an book with the title „Architecture“ on the back is open face down. The roof-like sculpture bears a chimney to the amusement of the beholder. It shows that Jose Luis enjoys his work. 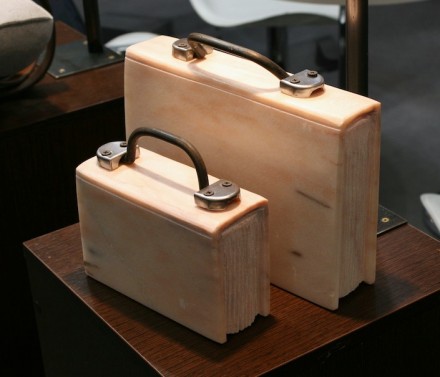 Another recent piece is his „Travel Books“ made of Portuguese marble. 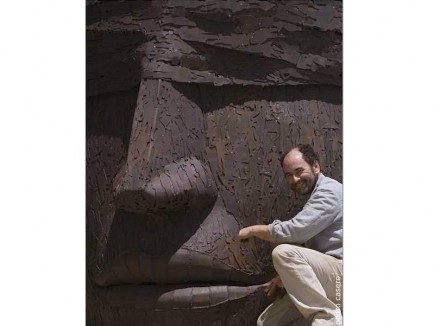