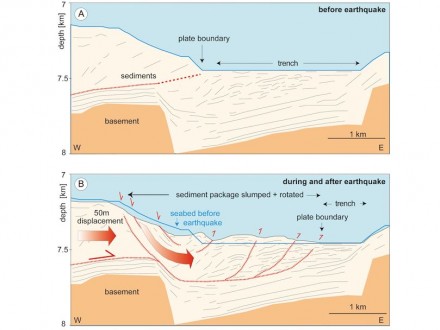 (September 2013) The earth shook for 150 seconds off the coast of Japan’s Tohoku region on the afternoon of March 11, 2011: The magnitude 9 earthquake triggered a tsunami that devastated vast stretches of coastline. More than 15,000 people lost their lives. At least 28 square kilometers of seafloor slumped suddenly down the slope of the 7.5 kilometer-deep Japan Trench. Consequently, the near-surface boundary between the two tectonic plates shifted as much as two or three kilometers to the east!

Immediately after the catastrophic event, Japanese and German geoscientists developed expedition plans to research the consequences of the earthquake off the island of Honshu. Just ten months later, the Japanese research vessel „Mirai“ was in use along the Tohoku coast. The former director of „Marum“ (Center for Marine Environmental Sciences), Dr. Gerold Wefer, led a German-Japanese research initiative to take place on the vessel „Sonne“ in February and March of 2012, funded by the German federal government and the German Research Foundation. This initiative focused on mapping and sampling the seafloor just east of the earthquake epicenter. The results of these expeditions have now been published in the August issue of Geology.

Both expeditions focused on areas where the Pacific plate slides beneath the Okhotsk plate and the Japanese volcanic arc. Frequent earthquakes result from this type of plate subduction. The Tohoku quake reached a magnitude 9 because the wedged plate boundary released energy that had been accumulating since the last mega quake in the year 869. Even before their expedition, the researchers knew that the Tohoku quake split the earth’s crust off Honshu over a distance of 400 kilometers and abruptly shifted parts of the coast up to five meters to the east. At the very edge of the Japan Trench, parts of the earth’s crust shifted more than 50 meters. What happened in the 7.5 kilometer deep trench itself, however, remained unknown.

The scientists set out onboard the „Sonne“ to map the kilometer-wide Japan Trench using echo sounders. When they compared these data with those that had been collected before the earthquake in 1999 and 2004, they were able to obtain a more accurate picture of how the earthquake had changed the shape of the sea floor.

To learn more about the transformation of the seabed at the trench, the research crew extracted several nine meter-long sediment cores. „The deposited layers of sediment were largely undisturbed,” says first author Dr. Michael Strasser of the Geological Institute in Zurich. „This allowed us to rule out that the earthquake caused erosive downward transport and chaotic re-deposition of the sediment at the bottom of the Japan trench.” Only in a few places did the researchers find evidence of turbulent transport and rearranged sediments.

Subsequently, the scientists analyzed the pore water, i.e. seawater trapped between particles of sediment, in the cores. „We measured profiles that show how the sulfate contents change with depth,” explains Dr. Martin Kölling, a geochemist at Marum. „In an undisturbed seabed, the sulfate content decreases linearly with increasing depth. We found these exact profiles in most of our samples.” In the cores with re-deposited sediments, the measurements reveal non-linear profiles. The researchers applied diffusion models to determine the timing of the sediment deposition and could link this transport with the Tohoku earthquake.

„Based on these studies, we concluded that the earthquake caused a 50-meter displacement of the earth’s crust, which triggered large slumps along the edge of the Japan Trench,” states Strasser. „In some places these slumps compressed the seabed sediments, forming troughs and ridges at the base of the Japan Trench.” 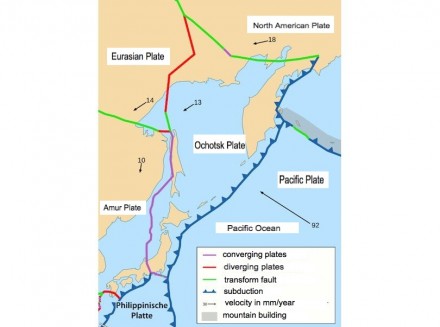 What really impressed the research team, however, was the displacement of the surface expression of the plate boundary by two to three kilometers to the east! „As geoscientists, we are accustomed to think in hundreds sometimes thousand-million year time-periods” says Wefer. “These expeditions have shown that plate boundaries can sometimes be profoundly altered by sudden events in just minutes or even seconds.”

Geology, August 2013: A slump in the trench: Tracking the impact of the 2011 Tohoku-Oki earthquake