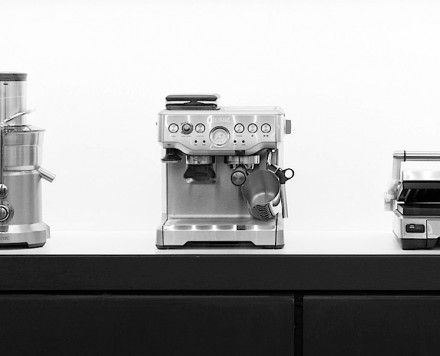 (September 2013) Bork which has made a reputation for itself in the high-end domestic appliance branch in the Russian and Eastern European markets has now adopted a Corporate Design by German designers Ippolito Fleitz. The motto is: products that are durable to the point of being nearly indestructible, dependable and precise. 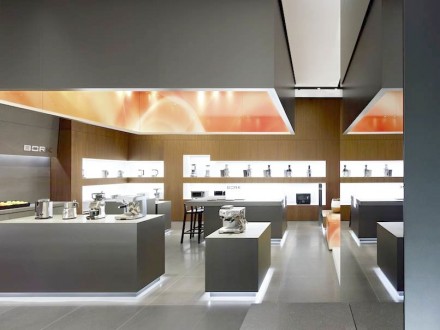 And the Moscow-based flagship store, shown in our photo, was designed in keeping with the motto.

The material of choice was Basaltina and Nero Assoluto natural stone as well as large metal sheets and wooden elements. Stone was provided by KMD Natursteine of Germany. 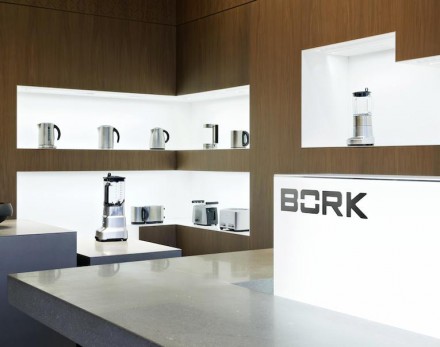 Lighting was used most effectively: blazing back-lit shelves envelop the appliances, emphasizing their form in space. 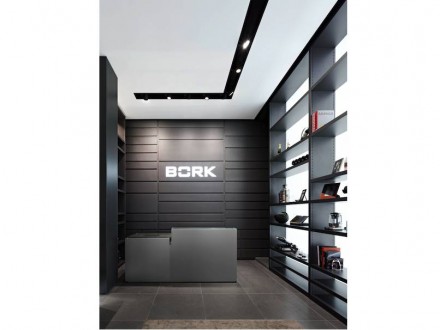 „The world of Bork stands under a decidedly masculine connotation“ according to a press release by Ippolito Fleitz.

The masculinity is accentuated through the clear lines and glass fronts extending over the entire height of the store. 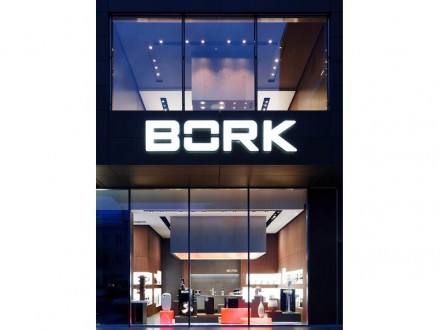 The glass frames are dainty and nearly invisible to allow an unhindered view of the interior.

Steps leading up to the store are made of Nero Assoluto granite, distinctly noble in appearance. On the interior, flooring is covered in Basaltina volcanic stone, as were the presentation surfaces. 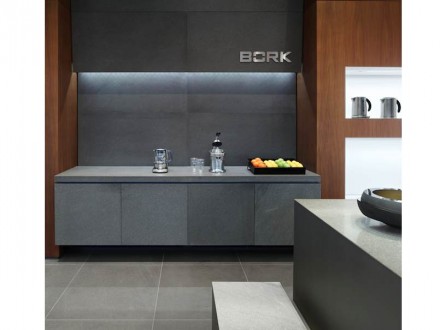 The niche for presentation is completely done in Basaltina. Miter joints and custom-made hinges ensure flush mounting and closing of cupboard doors. Interior work was carried out by Ganter Interior, Germany.

What with so much sobriety, some contrast was called for. Walnut veneer „provides a living-room atmosphere“, according to Ippolito Fleitz. 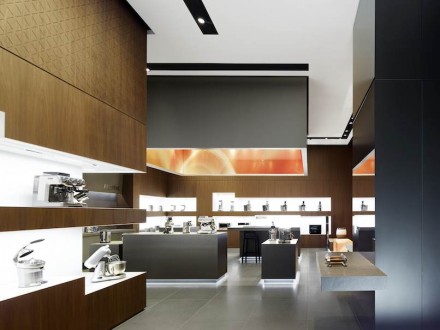 Lightness in contrast to the massive stone is achieved with the help of under-counter strip-lighting which seem to let the counter block hover above ground. Even the ceiling-mounted lighting cube seems light-weight. The lighting in Bork Corporate Colors adds an emotional element and aims to invite passers-by to come in and browse.

The top floor is reserved for meetings and talks.