Deflecting asteroids from their way to Earth 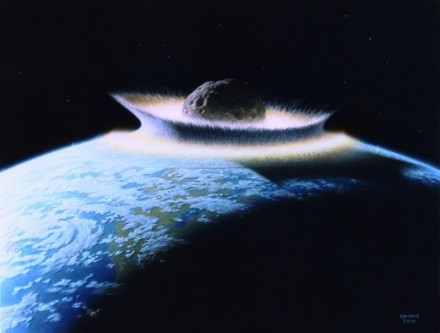 (September 2013) 65 million years ago, the Earth was ravaged by tsunamis, a huge dust cloud darkened the skies and acid rain fell on plants and animals. These events marked the latest mass extinction and the creeping end for more than 50 percent of all species on Earth. Not even the dinosaurs would survive this apocalypse. These events were most likely caused by an asteroid approximately 10 kilometers across that impacted the Earth in the area of today’s Gulf of Mexico, scarring the planet’s surface with a crater over 170 kilometers wide.

Is this scenario unthinkable today? To date, astronomers have identified almost 10,000 asteroids with an orbit that approaches or crosses Earths’ orbit – and the number is growing. Last February, a meteorite injured almost 1500 people when it exploded over the Russian city of Chelyabinsk, with a population of over a million. At a diameter of some 20 meters, the meteorite had a weight of 10,000 tons.

The objects that Frank Schäfer of the Fraunhofer Institute for High-Speed Dynamics, Ernst-Mach-Institut, EMI in Freiburg deals with are much larger than this. His research is focused on medium-size objects measuring between 100 and 300 meters in length. An asteroid of this size could potentially wipe out entire cities or regions.

The scientists have conducted initial laboratory experiments to verify the possibility of deflecting asteroids by impacting them with heavy masses at high speeds – for instance large space probes. The principle behind the impact is similar to a game of billiards: when one ball hits another, the second changes course. „During impact, not only does the probe transfer its own momentum to the asteroid, there is also the recoil of detached material from the crater, which is ejected against the direction of the impact“, describes Schäfer with regard to one of the key test findings. „This recoil effect acts like a turbocharger on the deviation of the asteroid.“ Tests show that, due to this effect, the overall momentum transferred to the asteroid is up to four times greater than that of the probe alone.

To study this more closely, researchers attach various materials with asteroid-like properties – dense quartzite, porous sandstone or airy concrete – to a pendulum and impact them with small aluminum projectiles. What they discovered was that the more porous the asteroid is, the less momentum is transferred. In other words, the projectile approach is particularly effective for denser space objects. The projectiles reach speeds of up to 10 km/s in the laboratory, which means they can attain the impact speeds that researchers are aiming for in future missions. In order to demonstrate the transfer of momentum and the associated efficiency of the impact, the researchers use high-speed cameras and laser interferometers to measure the pendulum’s swing.

„In actual fact, the impact of a space probe would change the speed of the asteroid by just a few centimeters per second. But that’s enough to deflect its course to a significant degree over a longer period. So if we want to stop an asteroid on collision course with the Earth from hitting us, we’ll need to fire at it many years ahead of time“, explains Schäfer.

The pendulum test is part of the NEOShield space project, which is funded by the EU and coordinated by Alan Harris of the German Aerospace Center’s (DLR) Institute of Planetary Research. It brings specialists from Germany, France, the United Kingdom, Spain, the United States and Russia together to work on ways to protect our planet from near-Earth objects, which are asteroids whose orbit brings them into our proximity. One of the project’s aims is to plan a space mission by mid-2015 to actually deflect an asteroid. There won’t be a shortage of objects for the specialists to choose from: according to NASA, there will be over 20 close approaches in September alone. Of these, object „2008 HB38“ will come closest to us on the 15th at just under five million kilometers.

Nasa recently published an update to its 2011 Global Exploration Roadmap. This concept promotes the cooperation of 12 national space agencies in order to optimize their forces to reach Mars in a manned mission. On of the proposed steps was to catch a small asteroid and to „park“ it in a controlled orbit. Using the swing-by of moon, astronauts might reach it in a mission of a few weeks and do scientific research there. That could be a half-way-journey to the Red Planet, so to say.