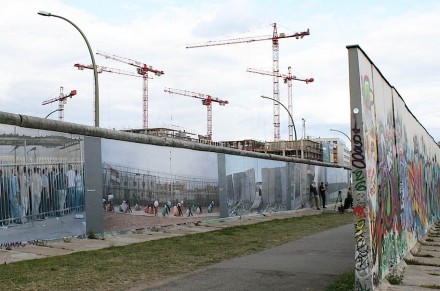 (October 2013) Berlin is currently facing a building boom. There are cranes and heavy machinery everywhere, and the outlook for the natural stone branch is excellent: luxury dwellings are in great demand and supplies are depleted. „The market is stagnant simply because there is no real-estate to sell“, according to the Ring Deutscher Makler (RDM) as reported by the daily Berliner Morgenpost.

In September Bulwiengesa Market Research Institute published positive perspectives: in July some 21.1 billion € worth of building investment were in planning, in building or nearly completed according to the Berliner Zeitung daily press. The market research referred to a time span ranging from 2010 to 2017.

Interestingly private investors are behind a considerable portion of this sum. Already back in 2011 the daily Tagesspiegel had reported on buyers seeking high-priced housing mainly for retirement or a second residence. In any event they were attracted by the cultural diversity and positive image of the city.

The article in the Berliner Morgenpost, mentioned above, cited the example of Pantera Company which purchased two decrepit turn-of-the 20th century houses near Berlin’s famous KaDeWe department store, investing a total of some 30 million € in the refurbishment of 22 luxury condominiums, all of which were swept away long before completion of the project and at prices ranging „from 4,500.00 to 10,500.00 €/m² considered a bargain price“, according to the paper.

For national trade organizations of the stone branch and joint-ventures Stone-Ideas.com has put together a special package to allow for a successful debut at the Berlin’s fair Bautec (Feb. 18th to 21st 2014). Contact: Peter Becker (Mail).