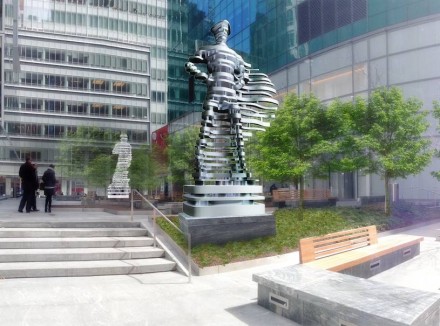 (November 2013) „The Guardians“ will be new landmarks in Manhattan after the end of this month. The 13-foot-high statues, one in marble and the other in polished stainless steel, are named „Hero“ and „Superhero“ symbolizing the past and the present.

Italian artist Antonio Pio Saracino created them on occasion of the Year of Italian Culture in the U.S. „Hero“ is gift from the Italian government and sponsored by energy company Eni. „Superhero“ is commissioned by Equity Office.

Both will be positioned at the ends of the public plaza at 1095 Avenue of the Americas at Bryant Park between 41st and 42nd Streets. They will remain on view indefinitely celebrating the historical links between both countries.

„Hero“ made of 8000 pound of stacked marble slices refers to Michelangelo’s David, defender of the city of Florence, and will gaze uptown from 42nd Street as a protector from the past. „Superhero“ is made of 15,000 pounds of stainless steel as an icon of the present. He watches over downtown from 41st street.

Both are fabricated in New York City. Their material and shape was chosen to address the surrounding skyscraper architecture. The stacked structure shall make them look like moving through the city, the artist is quoted.

Webpage Broadwayworld cites Italian Ambassador Claudio Bisogniero: „David (is) such a strong symbol of Italian cultural heritage and now a Guardian of the friendship between our two countries. The Year of Italian Culture in the U.S. couldn’t have left a better legacy.“ 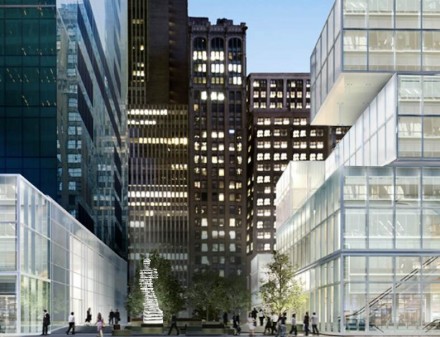