The Pope as a column-snatcher 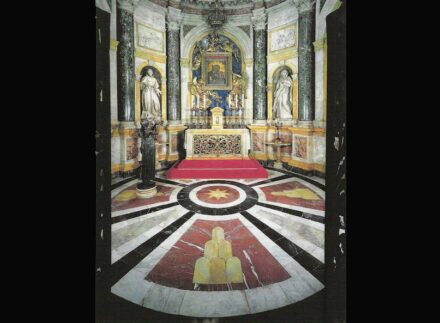 Dismantling occurred on order of the Pope under the cloak of darkness and in absolute secrecy: crates weighing many tons were escorted by torch-light to waiting boats on the shores of the Tiber – they would be underway for man months before finally reaching their destiny in Siena. The content was worth the trouble. The clandestine deployment in August 1660 served to relocate eight priceless marble columns originally incorporated in the very first basilica of Christendom.

Pope Alexander VII. (1599-1667) presented the pillars as a gift to his native town Siena, or rather: relocated them for use in the chapel of Siena’s Cathedral. Had the operation become public, the Pope would likely have had to fend off vehement protests of nepotism. The columns were not only remnants of the holy era of the Roman world order, 1000 years past. They were considered to be relics, having been incorporated in the Basilica of St. John Lateran by Pope Constantine around 325 A.D. It was the first bishops’ church in Rome and, as such, sacred for generations of believers to come.

The green marble pillars can still be seen in the Chigi-Chapel in the Siena Cathedral today. Art historian professor Klaus Güthlein of the University of Saarland in Saarbruecken in Germany did extensive research on the history of the chapel and the entire monument during the course of which he often encountered colorful anecdotes from long ago like the one about Alexander II: after he ordered the reconstruction of the cupola, he became severely ill. The townsmen of Siena prayed to God that their financial source might be restored to health, whereupon the Pope recuperated and bestowed upon the city sufficient funds to complete the project even after his death.

That was a big triumph for the citizens of Siena since a papal project of these dimensions literally stood on shaky legs. As a rule, Popes were aged men of ill health, which meant that if a project could not be brought to completion during the lifetime of a Pope, his successor would probably not bother to finish it.

By today’s standards, the chapel’s financing was the result of creative bookkeeping. But back then intermingling private and official business was not uncommon. In the case of the Chigi-Chapel, the project was officially commissioned by the Pope’s family (whose name it bears to this day), whereby the funding came out of the Vatican coffers.

This was not mere self-service of the Pope’s clan. It was, indeed, a precondition for projects of this dimension. The Chigis would never have been able to finance the entire project of their own means, so one hand washed the other the clan subsequently showed itself from its generous side in participating in further building projects commissioned by the church or the city.

One undoubtedly mammoth building project was the Chigi-Chapel albeit that the seven-meter breadth and twice the height may seem relatively small. The project cost 40,000 ducates, enough for a many times larger palace. 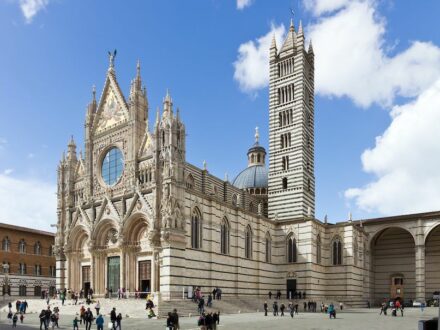 The impression left on visitors is nothing short of striking: it is a masterpiece in marble representing a wide gamut of the very finest sorts available from the quarries of the time and demonstrates the skills of the masons and artists of the day: pure grandeure, one might say.

The Chapel was a milestone for architectural history, setting standards for centuries to come. The Chigi-Chapel was the first Baroque piece of architecture built entirely of natural stone. „For any future builder, this was the standard to surpass if anyone wished to immortalize their family name“, according to Güthlein.

The eight lateral columns made of green Verde Antico were quarried in Thessalia, Greece and represent but one facet of the chapel’s splendor. The stone inlay-work on the wallmounted Papal crest. Variations in shade give the work an optical third dimension, almost as if „the crest seems to hover lifting itself off the wall“ as Güthlein describes. „Lavoro a commesso“ is the technical term for this type of inlay work in stone.

These masterpieces were produced in the Vatican where the most skilled masons and artists of the time worked their wonders. Comparing this project with another of Alexander VII.’s works the equivalent of the Chigi Chapel, namely the chapel of John the Baptist in the Siena Cathedral, clearly shows the difference in craftsmanship. There is no optical third dimension to the latter having been built by „mere“ Siena craftsmen.

Dictating new trends in style for centuries to come, the Chigi-cupola integrates Giovanni Bernini’s novel concept of mosaic cassettes bearing frescoes. His altar was also to be a paragon of beauty for generations of artists, craftsmen and architects, in which Mother Mary is shown with Christ-Child in a theatrical mise-en-scène as if descending from heaven. Religious dramatization of this sort was very popular among believers and came to carry, e.g. in the church’s annual passion-play.

Most sumptuous is also the lapislazuli backdrop to the painting of the Virgin Mary. This semi-precious stone was considered to be air or the blue sky in solid form. Nary another work of art uses so much of this stone. But that’s not all: one of the frames of the picture of the Virgin Mary is studded with diamonds.

Was it just for show that the builders unfolded such splendor in stone? Indeed it is necessary to transpose oneself into the mindset of the time according to Güthlein. It was not merely an act of immortalization but rather a declaration of solidarity and public relations act pro religion: „It was the intention to show how well to-do believers were and thus prove the power of faith.“

The demonstration was directed at Protestantism, which had long-since become a true competitor to Catholicism. The plan actually came to fruition in the case of the Swedish Queen Christine who converted to the Catholic faith, relinquished her rights to the throne and henceforth lived in Rome – facts used by the Vatican for purposes of propaganda.

But coming back to the columns in the Chigi-Chapel: how was it that on one had noticed that the pillars had been ushered away?

Of course someone must have known of the plan according to Güthlein. But privy parties were more likely to be Papal accomplices: the fact was not noted in any of the Vatican documents and their acts were soon forgotten.

Two generations hence in 1723 during restoration of the Basilica of St. John Lateran the historic pillars were no-where to be found. It was assumed that they must have been buried and officials ordered excavations to be carried out all around the basilica, in vain.

The findings of research surrounding the Chigi-Chapel are published in Vol. 3.1.1.2 of „Die Kirchen von Siena“ (Deutscher Kunstverlag, 2006).