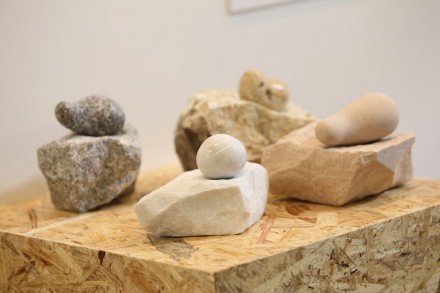 The natural stone branch is currently experiencing a metamorphosis reflected in its trade fairs among other aspects. Nuremberg’s biannual Stone+tec already reacted to the change in 2013 giving itself a new profile: It aims to hold events for Stonemasons from German-speaking countries (Germany, Austria, Switzerland and Northern Italy).

The current issue (May 13th to 16th 2015) shows how promising this concept is. But it requires more effort for sustained development.

Noticeably this Stone+tec was a natural stone trade fair almost devoid of natural stone: only a few exhibitors were stone traders, and traders from abroad with whom we spoke were not satisfied with attendance.

On the other hand: traders in machinery and tools were very pleased as were tombstone producers and cemetery suppliers.

As seen through the looking glass of the target group, the results were astoundingly brilliant: in 2013 many stone masons still had been ambiguous about attending the next Stone+tec. However now they had the distinct feeling that this is t h e i r fair.

The accompanying program set up by the Stonemasons Trade Organization BIV endorsed this feeling: The most urgent questions were discussed, i.e. acquisition of new members and young generation stone masons. Perspectives for future development were also a topic of discussion.

The Fair Organizers had organized 6 special shows with thematic focus.
Everything revolved around the Stone+tec and stonemasons. In fact the Fair had the general air of a big family get-together, as was previously known from stone fairs of yesteryear.

Let us reflect back on an example from Italy: the old Sant’Ambrogio di Valpolicella was always a merry event up until the first wave of globalization and with it the establishment of Marmomacc’s professional Forum for international activity.
In the years which followed, every stone trade fair around the world went international. That era now seems at a close.

The almost quaint „familiarity“ of Stone+tec points to possible perspectives. Other stone fairs have slipped under the auspices of roofing or building events.
But what are the perspectives for Stone+tec to grow despite its relatively small target group?

Of course its path is the same as that of its target group members, i.e. garden and landscaping as well as interior design, in particular bathrooms and kitchens. We are not talking about top of the line luxury elements but rather about the middle class clientele.

The challenge is to tie these themes into the Stone+tec, particularly since each of them has its own trade fair.

Provided the integration of the new themes is successful, stone producers will return to the Stone+tec in time.

Another field of potential growth is that of engineered stone. Stonemasons are hardly active in this field, regularly refusing to work engineered stone counter tops.
And last but not least: product-designer in natural stone has growth potential as well.

In this context, allow us to draw our readers’ attention to the Polish student competition under the auspices of the trade magazine Nowy Kamieniarz in cooperation with Poznan’s „Stone“ Trade Fair and the NürnbergMesse. 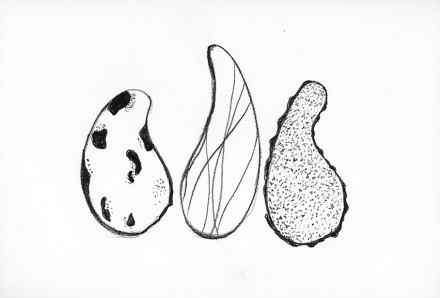 The award winners were announced at the Nuremberg Fair. Our photo (far top) shows works by Patrycja Otachel: she had originally designed stones in the shape of beans to aid blind children to sharpen their senses by haptic experience. She now wants to expand the spectrum to include a number of „palm stones“. In combination with an appealing packaging, there is a market for such Touch-Stones. 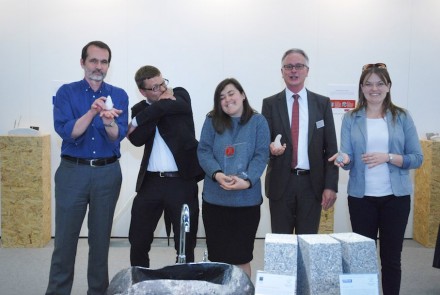