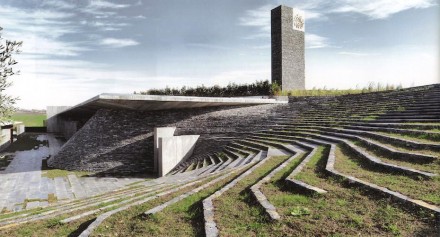 The upcoming Marmomacc (September 30th to October 3rd 2015) will see the International Awards Architecture in Stone distributed. Every two years the jury honors word of the most unusual building idea in natural stone. Curator for the choice of winners is Vincenzo Pavan Ferrara University’s faculty of architecture.

The selected works will be the subject of an exhibition of drawings, photographs, videos and models set-up during Marmomacc in the Architecture & Design area (Castelvecchio Gallery between Hall 2 and 3).

Emre Arolat Architects, Sancaklar Mosque, Istanbul, Turkey, 2012: The strategy of the project was determined by the morphology of the landscape of which the building becomes an extension. A sequence of rustic stone walls and slab steps, that bond the construction with the lawn, mediate descent into underground spaces, which house the prayer rooms, conceived as caverns. With the exception of the minaret, which rises as a landmark and is conceptualized as a parallelepiped, only low horizontal volumes of the complex come to the surface. Careful distribution of natural light radiating from the skylight contributes to the rarefied atmosphere of the underground meeting and prayer spaces.

David Chipperfield Architects, Jumex Museum, Mexico City, 2013: The Jumex Museum by David Chipperfield Architects, with a volume characterized by light stacked overhangs and an unmistakable shed roof, confronts the urban development of Mexico City with stereometry of great iconic power. The large slabs of the Xalapa travertine facades emphasize the stark contrast between the openness of the floor plan at the ground floor level, the panoramic loggia on the first floor and the compactness of the upper gallery floors. Interiors use plaster and glass, concrete and stone – with a multicolored marble bookshop floor by the artist Martin Creed – to modulate the different characters of the rooms of a contemporary exhibition space.

Max Dudler + Atelier WW, Tower buildings in Hagenholzstraße, Zurich, Switzerland, 2013: The Hagenholzstraße group of buildings by Max Dudler, among the various projects and achievements for the „Zurich Metro”, West-Zurich and North-Zurich zones, is one the very few interventions that, thanks to the shape of the urban typology, is a clear expression of urban planning. It is as if the archetypal form of the stone, as a cut block and a geometric cube, determined the architecture in a linear and direct composition that goes from the smallest details up to the complete figure. The quality of the Hagenholzstrasse complex is to be found precisely in this choice of elementary forms that are in continuity with the intrinsic character of their material.

Henegan Peng Architects, Giant’s Causeway Visitors’ Center, Antrim, Northern Ireland, 2014: This complex, located close to one of the most beautiful portions of the coast of Northern Ireland characterized by the presence of columnar basalt concretions, is brilliantly placed in the landscape. The sharp lines of the floor plan and the inclined planes of the roofs are made meaningful by the designers’ choice to use tall stone slabs of different sizes in the elevations. Their dark surfaces punctuate the rhythmic alternation of empty and full spaces and give significance to the whole envelope emerging from the soil.

Perraudin Architectes, Massive Stone Social Housing, Cornebarrieu, France, 2011: Perraudin’s project is interesting for its use of stone as a building material, not as an ornamental cladding. The building does not „contain” stone, it „is” stone in the most traditional sense. Moreover, this being a „social housing” project, use of this material ennobles a type of construction that is usually associated with more modest materials. The composition of the building meets these same criteria: it flows out from the cut stone and laconically shows itself to be „home”. The homogeneity achieved between material, method of construction, function, composition and purpose, makes this building worthy of being rewarded.

„Ad Memoriam Award“: Adalberto Libera (1903‐1963), Horizontal residential unit in the Tuscolano quarter Rome, Italy, 1950-1954: Adalberto Libera was one of the most original protagonists of Italian architecture of the twentieth century. His project for the Tuscolano district in Rome, the horizontal dwelling unit built between 1950 and 1954, is the best result of the works he performed for INA Casa. The Tuscolano complex, an original attempt to blend the dwelling unit type with the low residential fabric inspired by Mediterranean and North African architecture, is an important episode in the history of twentieth century Italian architecture and is an eloquent historical document for understanding how our country confronted the task of post-war reconstruction, often using local materials such as stone.