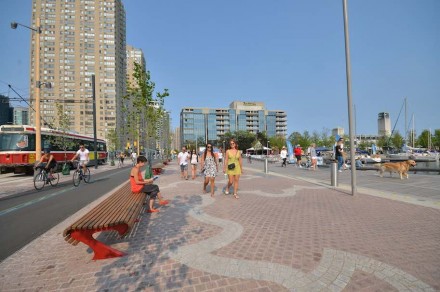 Some critique was voiced because granite was used as a paving material. The reasoning could have sprung from an advertisement for the natural stone branch: „It is just a question of design excellence“, to quote the Waterfront Toronto’s CEO. „You get to do your waterfront once a century if you’re lucky — you do it right.“ 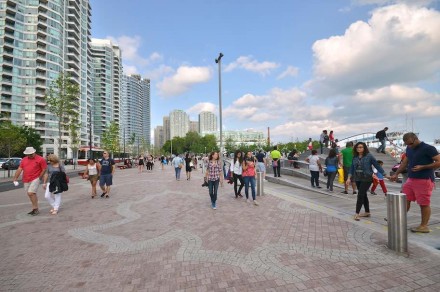 The Waterfront is constructed on Toronto’s Lake Ontario-bank. An exceptional redevelopment project, Waterfront Toronto has taken on the task of revitalizing and modernizing the 2 km-long Queens Quay. Word has it, that the area can compete with the Copacabana in terms of visitors. 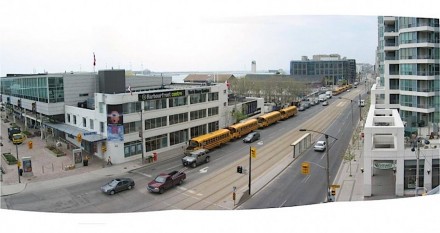 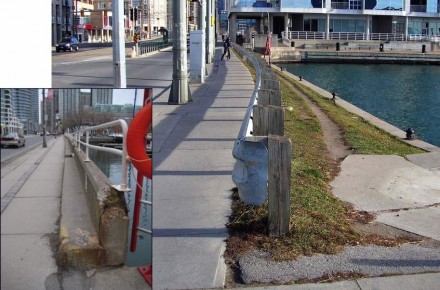 Construction took three years. June 2015 marked the opening and symbolic ribbon-cutting ceremony at which citizens were invited to wave a 650 m-long blue ribbon.

Landscaping and planning was carried out by the Rotterdam’s West8 in partnership with Toronto’s own dtah.

Here is a short run-down of measures taken: aside of the complete renewal of pipes and wires underground, the four-lane roadway was reduced to two to accommodate the growing numbers of pedestrians, cyclists and transit travelers. A street car was also part of the renewal as was extensive construction of bicycle pathways, and sidewalks. Some 200 trees were planted as well. 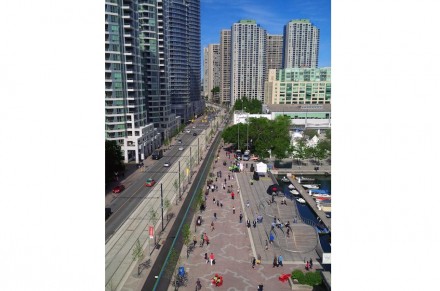 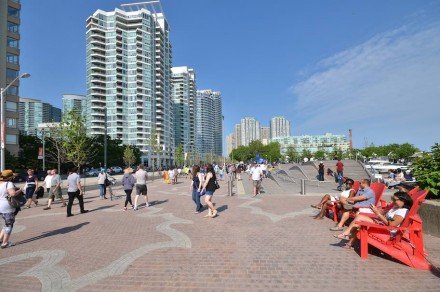 Broadening of pedestrian walks was achieved through the now renowned 3 WaveDecks: They bridge parts of the adjoining water area in the shape of waves, covered in wooden planks. They provide room for strolling and resting.

The paving was elaborate and covers the ground on both sides of the street in local granite (some 2.5 million hand set stones) in red Royal Canadian and white San Sebastian. Both types originate from the province of Quebec and were provided by Polycor Company. 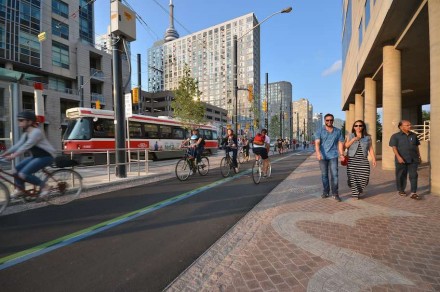 The pedestrian pathways on the waterside are decorated in maple leaf patterns.

Here are a few technical details:
∗ the paving was let in longitudinally along the pathways;
∗ contours of the maple leaves are set in white granite;
∗ on the interior the paving is set at a 45° angle;
∗ the surface of the stone is water-jet cut and flamed;
∗ along the cyclist paths, stones have a rough surface.

Attention was given to ensure that the pavement is pleasant even for those sporting high-heel. Trials showed that the width of gaps between the stones should be no more than 1.2 cm. The gaps are filled with polymeric sand by Techniseal: it hardens but the joints remain flexible. Paving was realized by Aldershot Landscape Contractors and subcontractor UCC and JC Paving. Construction manager was ECCL.

In total the cost of modernization of the Queens Quay was 128.9 million Canadian Dollars. Some 11.9 million dollars went into the 21,245 m² of paving and curbstones. 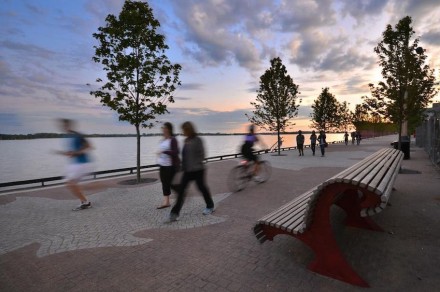 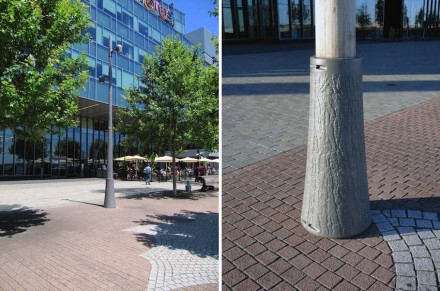 The budget was exceeded by some 35 million dollars as unforeseeable circumstances required correction during construction. Some 4.4 million dollars of natural stone were part of the exceeding costs as the paved surface needed to be extended. Fault, too, was attributed to the „rapidly increasing market prices for granite because of Toronto’s high-growth construction market”, according to the Toronto Sun.

Video of the opening ceremony