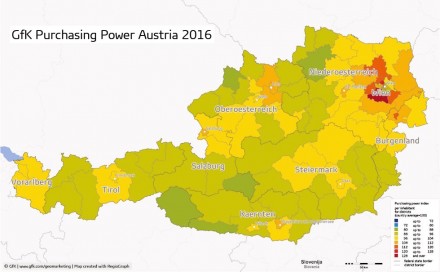 For Austria, each citizen has an average of €22,536 for consumption, rent and living costs / Switzerland: per capita €42,300

GfK has released the purchasing power data for Austria and Switzerland. Its levels vary substantially both between and within these two neighboring countries.

Purchasing power measures the available net income of the population, including government subsidies such as unemployment assistance, child benefit and pension contributions. The study illuminates the regional differences in these values.

The district „Wien 1 – Innere Stadt“ has a per-capita purchasing power of €40,217, which is 79 percent higher than the Austrian average. Second place is occupied by Vienna’s thirteenth district, Hietzing, which has around one-fourth less purchasing power.

Compared to the previous year, the discrepancy in the purchasing power between city districts and their surrounding areas has decreased in some instances. This is the case for Linz and Linz-Land, Klagenfurt and Klagenfurt-Land, Sankt Pölten and Sankt Pölten-Land as well as Eisenstadt and Eisenstadt-Umgebung. 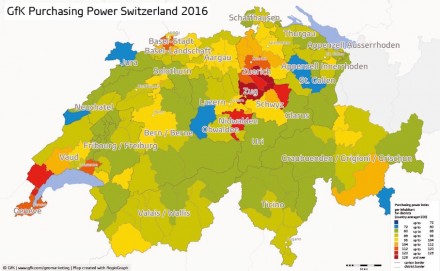 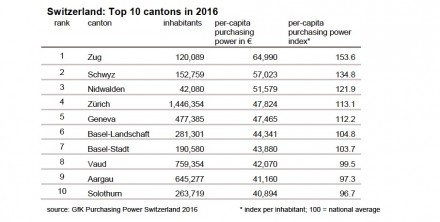 The three least wealthy cantons – Glarus, Uri and Jura – have purchasing power levels between 13 and 19 percent below the Swiss average. Even so, inhabitants of the least affluent canton Jura still have €34,095 per person, which is significantly more than inhabitants of Starnberg, Germany’s district with the highest purchasing power (€31,850). But Swiss inhabitants must also pay substantially more for accommodation and food. 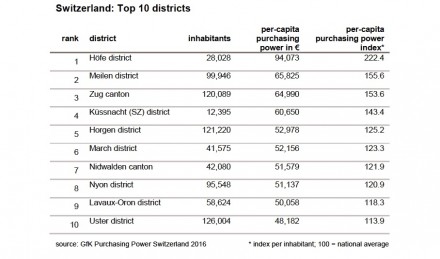 There is a wide distribution of purchasing power values at the district level in Switzerland’s cantons. In Schwyz – Switzerland’s second-most affluent canton – each inhabitant has an average of €57,023. But regional differences are apparent within this canton upon close inspection. 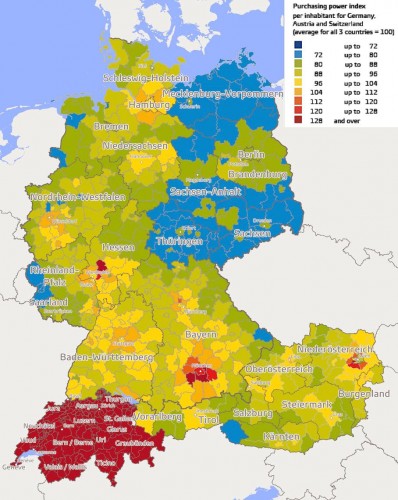