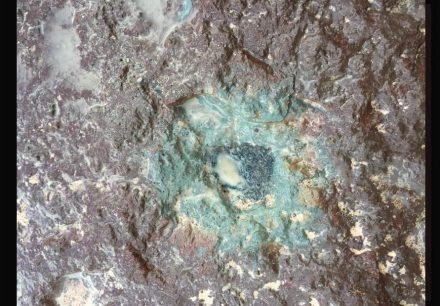 An ancient space rock discovered in an active Swedish quarry is a type of meteorite never before found on Earth, scientists reported in the journal Nature Communications.
„In our entire civilization, we have collected over 50,000 meteorites, and no one has seen anything like this one before,“ said Qing-zhu Yin, professor of geochemistry and planetary sciences at the University of California, Davis.

The new meteorite, called Öst 65, appears to be from the missing partner in a massive asteroid collision 470 million years ago. The collision sent debris falling to Earth over about a million years and may have influenced a great diversification of life in the Ordovician Period.

One of the objects involved in this collision is well-known: It was the source of L-chondrites, still the most common type of meteorite. But the identity of the object that hit it has been a mystery.

Öst 65 was discovered in Sweden’s Thorsberg limestone quarry, which is the source of more than 100 fossil meteorites. The nearest village is Österplana situated in southern Sweden near the Vänern Lake. The region once was covered by an ocean with Scandinavia and Baltic as sea floor.

The new meteorite measures just under 4 inches wide and looks like a gray cow patty plopped into a pristine layer of fossil-rich pink limestone. The Öst 65 rock is called a fossil meteorite because the original rock is almost completely altered except for a few hardy minerals – spinels and chromite.

Analyses of chromium and oxygen isotopes in the surviving minerals allowed the researchers to conclude the Öst 65 meteorite is chemically distinct from all known meteorite types.

By measuring how long Öst 65 was exposed to cosmic rays, the team established that it traveled in space for about a million years before it fell to Earth 470 million years ago. This timeline matches up with L-chondrite meteorites found in the quarry, leading the study authors to suggest the rock is a fragment of the other object from the Ordovician collision. The original object may have been destroyed during the collision, but it’s also possible that the remains are still out in space.

Researchers think that about 100 times as many meteorites slammed into Earth during the Ordovician compared with today, thanks to the massive collision in the asteroid belt. This rain of meteorites may have opened new environmental niches for organisms, thus boosting both the diversity and complexity of life on Earth.

The study was led by Birger Schmitz, of Lund University in Sweden. Yin, of UC Davis, together with his postdoctoral fellow Matthew Sanborn, made the very precise measurement of chromium in tiny mineral grains within the meteorite. Researchers from the University of Hawaii at Manoa analyzed its oxygen isotopes.

The new findings strengthen suspicions that more recent meteorite falls on Earth do not represent the full range of rocks drifting through the solar system. Yin said there is potential to better understand the history of our solar system by collecting meteorite fragments preserved in Earth’s ancient rocks. „If we can go back even further in time, we may eventually be able to find some of the true building blocks of Earth,“ Yin said.