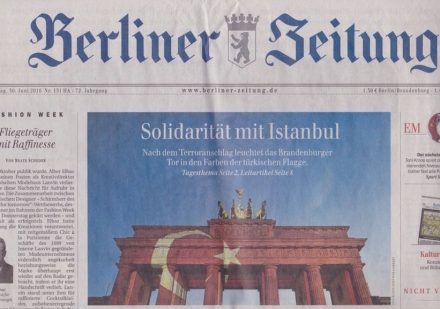 Brandenburg Gate in the colors of the Turkish flag / Among the Berliners are about 200.000 people with Turkish background

„Solidarity with Istanbul“ was the headline of Berliner Zeitung on September 30, 2016. The paper from the German capital showed a photo of the Brandenburg Gate in the colors of the Turkish flag.

The evening before, a terrorist attack on Istanbul Ataturk airport had caused at least 41 dead and over 200 injured.

All the flags in Berlin were at half-mast.

Since 1989, Istanbul is one of the sister cities of Berlin. In the 1930ies, under the Nazi regime in Germany, many scientists and politicians had found shelter in Atatürk’s Turkey. One of them was Ernst Reuter who became Governing Major of Berlin after the war.

Among the Berliners of today are about 200.000 people with Turkish background including many Kurds. In total, Berlin has a population about 3,5 Million people (2012).