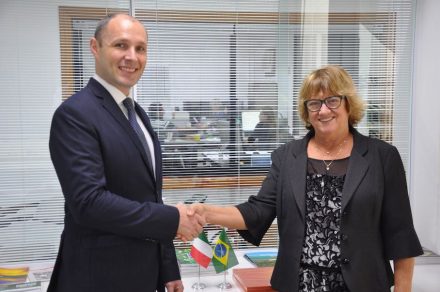 Fair organizer Veronafiere has made an important personnel decision: since July 1st Alberto Piz has taken on the job of administrator of Veronafiere do Brasil, owner of the Vitória Fair. At the same time, Piz also acts as director of operations of Milanez&Milaneze Company, which successfully founded the Fair in Espírito Santo.

The 41-year-old Piz studied law at Milan’s private Università Commerciale Luigi Bocconi which entitles him to hold the title of doctor according to the Italian educational system.

His career lead him through the office of foreign trade of the region of Veneto in Northern Italy to his last position as delegate of the Italian-Brazilian chamber of commerce in the Province of Minas Gerais for which he established contacts to in the region around Venice.

„He will continue to develop and expand the event on a national and international level“ in accordance with his position’s description. This will take place in cooperation with Cecília Milanez Milaneze, CEO of Milanez&Milaneze.

One primary point of focus on a national level is the Cachoeiro Stone Fair in Espírito Santo’s backlands. Among the trade fairs with a regional focus we see the Mec Show Show (Metalmecânica, Energia, Automação) for metalworking, energy and automation and the Expo Construções, a building and construction trade fair in the capital Vitória.

Milanez&Milaneze’s webpage witnesses the cooperation entered in 2013 with Veronafiere with a pledge to increase „trade fairs, conferences and congresses as well as other trade events in all of Latin America“.