Redevelopment of Governors Island: stone blocks from the former seawall – shortcut to the summit of Outlook Hill 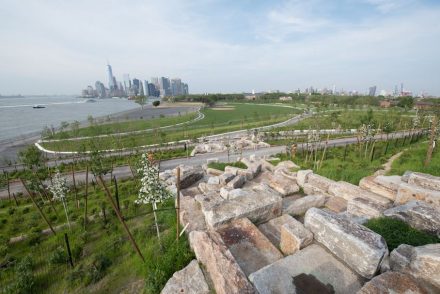 Those who attended the tour of the Island before its official opening report that the stone blocks on the Hill are arranged to entice visitors to climb to the summit.

We are talking about the new Outlook Hill on Governors Island overlooking Manhattan. Rising 27 m (70’) over the banks of the Hudson River, visitors can make their way to the top via a paved path or take the shortcut and hop to the top from block to block. 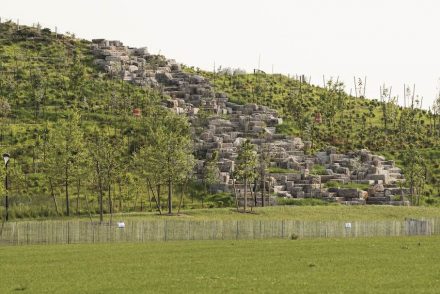 Those who make their way to the top by climbing up the stones can ponder over their provenance: the blocks were part of the seawall of the old retaining construction of Governors Island. The regularly shaped pieces were visible from the shore, whereas the remaining blocks served as mass. 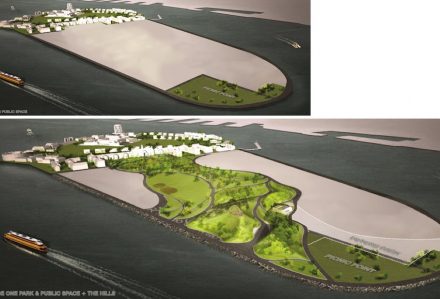 Four man-made hills of different heights are the heart of the Island’s landscape design concept and newly developed recreational park for New Yorkers and tourists alike. The formerly barren landscape now offers walking paths, meadows, slides for all ages, and, last but not least, a fantastic panorama view including the Statue of Liberty, Ellis Island – landing point of the settlers, the coast of New Jersey, and adjacent: the port of Brooklyn plus the skyline of Lower Manhattan. 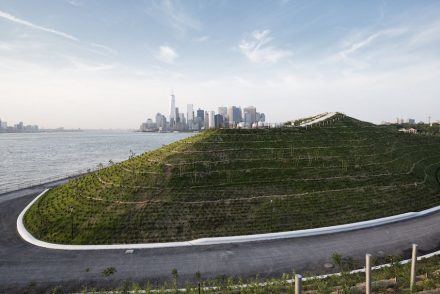 The Hills are composed of demolition debris, slag from New Jersey’s blast-furnaces and light-weight pumice. The hills’ slopes are secured thanks to special geotechnical engineering techniques. And finally some 860 trees and 41,000 shrubs effectively secure the soil and banks.

It was not West 8 Urban Design’s aim to create a Disney-World-Landscape. On the contrary, they aimed to conjure natural landscape with local flora able to cope with the saline ocean spray that would at the same time protect the Island and its buildings from wind and weather. 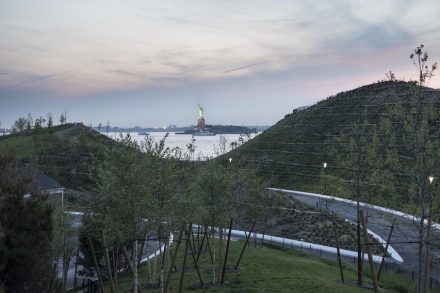 The fact that these hills are man-made is made visible by means of the asphalt paths with white concrete bands effectively chalk-marking the landscape.

Pedestrians and bicyclists can now once again negotiate the 2.2 mile river bank. Already in 2014 the sports field and playground had been opened to the public. 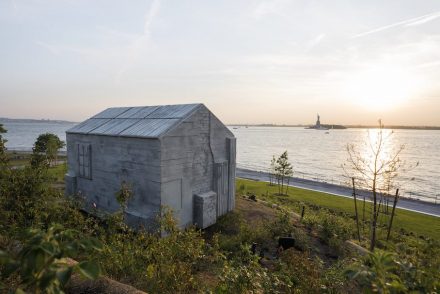 A further attraction of the Hills is the site-specific installation by the name of „Cabin“, the work of Rachel Whitehead: she took a concrete imprint of the interior of a simple cabin and installed it on Discovery Hill. The installation will eventually be overgrown by greenery. Around it, she set up bronze imprints of refuse.

Visitors are reminded of Henry David Thoreau as became obvious during the pre-opening tour. Thoreau had taken up house in such a shelter in New England in 1845 for two years to live as one with nature.

In some passages of his famous book „Walden. Or life in the Woods“ Thoreau remarks suspiciously that one could hear the railway steaming along the tracks.

The new hills are constructed to resist rising water as a result of global warming.
The unforgettable view of Lower Manhattan reminds visitors of the missing Twin Towers of the World Trade Center. 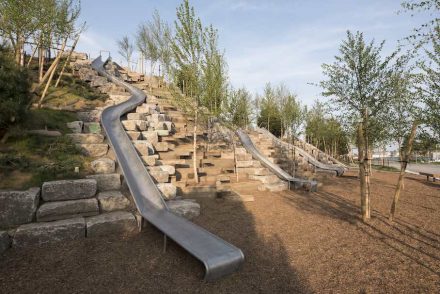