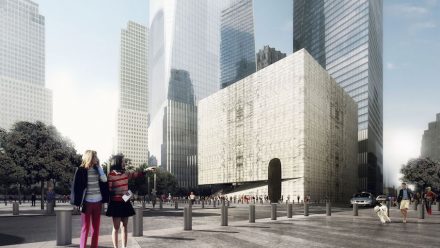 The stone will from the same quarry as the U.S. Supreme Court building and the Thomas Jefferson Memorial / Laminated within insulated glass

The new Ronald O. Perelman Performing Arts Center, located at the World Trade Center site and set to open in 2020, will be wrapped in translucent, veined marble, as recently unveiled by the Center’s Board of Directors. The new venue for premiere theater, dance, music, film, opera, and multidisciplinary works will be a contrast to the gleaming glass towers on the north side of the 9/11 Memorial.

The stone will from the same Vermont quarry as the U.S. Supreme Court building and the Thomas Jefferson Memorial—laminated within insulated glass, according to a press release.

„By day, the volume is an elegant, book-matched stone edifice, whose simplicity and traditional material acknowledge the solemnity of its context. Daylight illuminates the interior through the marble façade. By night, this monolith dematerializes: silhouettes of human movement and theatrical configurations animate the glowing enclosure, an invitingly subtle revelation of the creative energy inside.“ 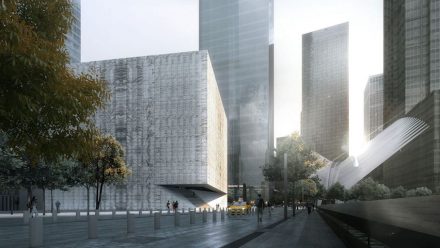 Designed by New York-based REX architectural studio, the concept for the Center is inspired by its mission to defy experiential expectations. Its design cues were taken from the Center’s aim to foster artistic risk, incubate original productions, provide unparalleled flexibility, and deliver the most technologically advanced and digitally connected spaces for creative performance.

Considered the final piece of the World Trade Center master plan, The Perelman Center has — for over a decade — been part of the vision for the renewed site.

The last cost estimate for the Center for this 90,000 square-foot building came in at $243M.

By the way: Barbra Streisand, Brooklyn native, is the new chairperson for The Perelman Center’s board of directors. 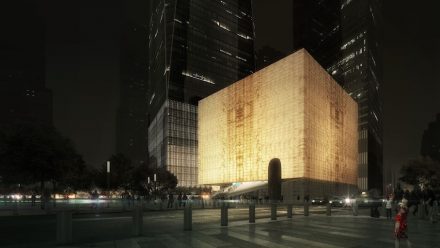