According to the organizers, the country has noted a growth in import of natural stone by 40% in the last 5 years

2017 will mark the Canadian Trade Fair for Natural Stone, Ceramics and Tiles to be held under the name Stonex from May 17th to 19th in the country’s economic capital Toronto near Niagara Falls. The Trade Fair Organizer is Informa Exhibitions Company, which is responsible for some 150 trade fairs worldwide including TISE held in Las Vegas. StonExpo/Marmomacc America is also held under its auspices.
The Toronto show takes place in cooperation with the Terrazzo Tile & Marble Association of Canada (TTMAC).

In view of the economic strength of the country, the question is: why has such a fair been so long in coming in this vast country in northern North America. We posed the question to Nasser Deeb, Informa’s Director of International Shows. „As the organizer of the largest Construction, design, architecture and real estate show in Canada, The Buildings Show, Toronto, we realized the urgent need for such event to serve the growing stone industry in Canada particularly in the last 5 years where stone imports had increased more 40%“, he tells us.

He goes on: Canada’s economy is strong and consumers are demanding a wide palate of products, „thus more imports are required“, so Nasser Deeb.

The country with a population of some 36 million has a very high standard of living: it ranks fifth in the Legatum Prosperity Index (after New Zealand, Norway, Finland and Switzerland) way ahead of the USA (17th). The Index is also cited by the world bank; it not only takes into account the per capita ownership and wealth but also the level of satisfaction and positive expectations. 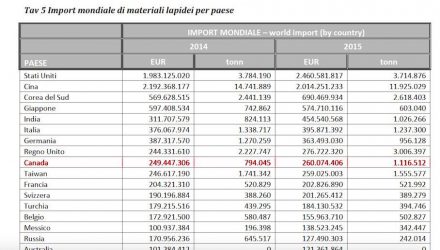 To gain an overview of the natural stone branch in Canada, we took a closer look at the statistics in IMM Carrara’s „Stone Sector 2016“. Canada ranks within the top 10 in natural stone imports.

Stone imports were up by 4.2% from 2014 to 2015 according to the table. Recently a big increase of imported raw material could be noted which was obviously the deciding factor for a jump in tonnage (+40.6%).

Relative to the USA, which boast a 10 times higher population, Canada has a per capita consumption of stone twice as high as its southern neighbor, as can be calculated form the facts and figures in Dr. Carlo Montanis Statistical Yearbook „XXVII rapporto marmo e pietre nel mundo“. 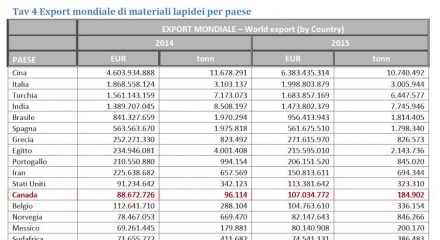 The country plays a minor role as an exporter by mass. But the turnover of exported value-added products is notable.