Refurbishment for the most famous showcase for Portland limestone 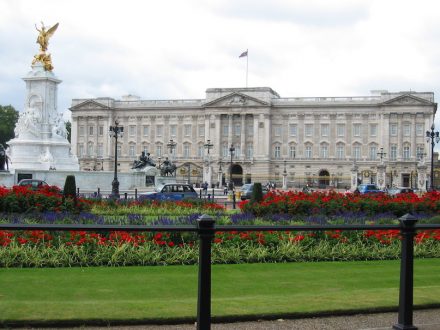 Buckingham Palace, the main showcase for Portland limestone in the British capital, will see a £ 369 million (€ 441 million, $ 461 million) renovation presumably starting in April 2017 and taking for 10 years. The administrative center of the queen, where she spends one third of her working year, is in bad condition: „The refurbishment, the biggest undertaken on the property since the second world war, will renew the palace’s 33-year-old boilers, 100 miles of electrical cable, some of it 60 years old, and 20 miles of lead and cast iron pipework,“ the Guardian writes.

„Though the palace is the venue for glittering state occasions, royal officials have long complained of the crumbling building and the need for it to be updated. Examples include a chunk of masonry falling from the front facade several years ago and narrowly missing the Princess Royal’s car and staff reportedly resorting to catching rainwater in buckets to save art works. Last year, when a workman tried to carry out repairs to the Queen’s private chain-pull toilet, the whole structure reportedly came away from the wall.“

Critics questioned why so much money has to be spent in times of austerity. The master of the Queen’s household, said: „On completion of the work, we’ll have a palace fit for purpose until 2067.”

Portland Stone, London’s dominant building material, in its white Bath Stone variety, is at the façade of the East side of Buckingham Palace finished in 1854. During the 17th century the limestone originating from the small island in the British Channel, was used by architect Christopher Wren to rebuild churches and public edifice after the great fire in 1666.

His masterpiece was St Paul’s Cathedral.

Portland limestone even made it across the Atlantic to parts of the United Nations Headquarters’ façade in New York.

A webpage of the British Geological Survey gives details about London’s building stones.