The story of an „Unfinished Symphony“ in monumental Sölker Marble proportions 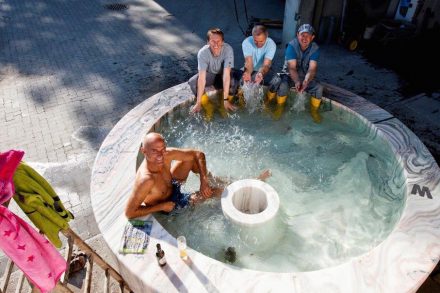 „Truly monumental“ best describes the raw blocks which went into the construction of the fountain by Austrian stonemason Michael Egger, i.e. 4 x 4 x 1.20 m amounting to a mass of 50 t. 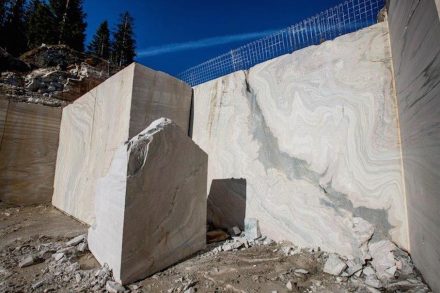 Sölker Marble originating from the Austrian Alps was implemented. The block was roughly brought into shape on site at the quarry to facilitate transportation. Parts with fissures or unwanted coloring were cut away. 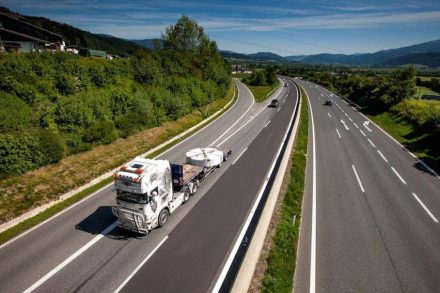 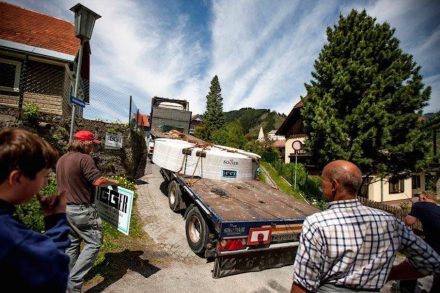 Despite the reduction in volume, transportation of the rock was no simple matter. 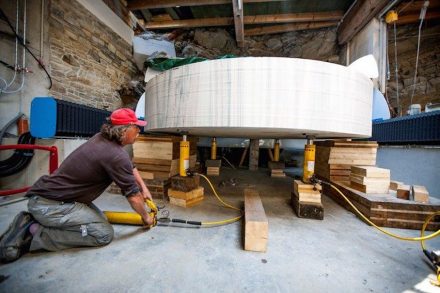 What luck that Egger had ordered a five-axial CNC-driven saw just in time to work the rock and test its qualities. Or was luck on his side because the specified the completion date?

In any event Eggers was full of praise for Gemba (Thibaut) Company, which supplied the saw: „We received much more help than agreed at the time of purchase. So we could carefully approach the project in steps.“ 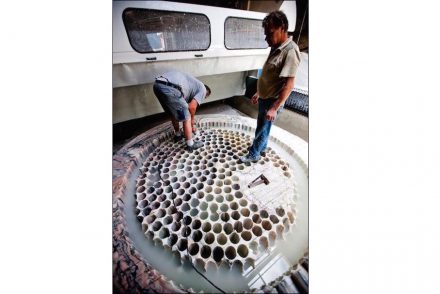 Hollowing out the trough or font began with drilling 490 bore holes. Working the stone in this manner, although unusual, served a particular purpose: The client planed to make gifts for his clients from the cylindricals extracted from the block, later.

So far, so good. After having perforated the block, a type of honeycomb structure was left which had to be removed. The task proved more difficult than anticipated as the honeycomb stuck tight to the bottom of the font.

After having reverted to hammer and chisel and raw strength, the heavy machinery once again came to use giving the bottom of the font a slant of 3 cm to create a run-off worked into the stone. 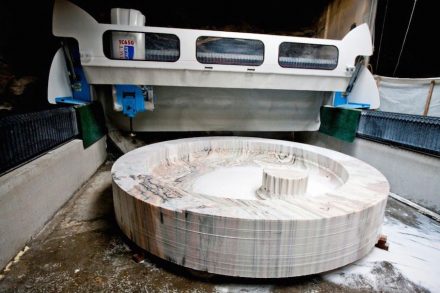 A distinguishing factor of the font is a pillar left standing, through which water was to be pumped into the basin. The intention was to set a sun dial atop the pillar.

This report contains a great amount of subjunctives. To explain the secret behind the mood, the cloak of secrecy around the client must first be lifted: it was a solar power company which had commissioned the fountain for the entrance to its headquarters.

But the story took an unexpected turn when the Chinese competition deflated the economic boom of the solar energy branch. The client laid completion on ice.

Stonemason Michael Egger took it in stride, perhaps because he had secured his position contractually.

And he is full of praise for Sölker Marble: „The structures in the stone emulate waves not actually present in the water.“ And he is pleased that the material which endured millions of years, now has a new lease on life.