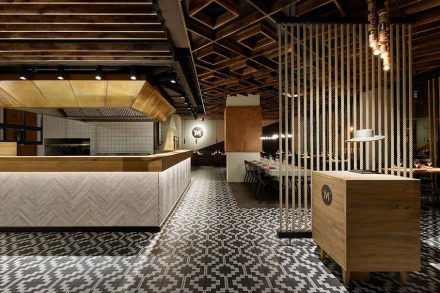 The patterns on ponchos worn by Argentinian Gauchos were the paragon for interior architecture in a Berlin steakhouse. The design was developed by Ippolito Fleitz Group. The geometric shapes are repeated on tiles on the floor and in natural stone cladding on the counter (German).

Designer Tom Dixon shows his marble products on a webpage.

Model Cindy Crawford is the new marketing-face of Engineered Stone Silestone in 2017 and 2018, Cosentino informs. „Eternal“ is the title of a new Silestone-collection which copies natural stones. The slabs are produced with the new technology N-Boost (1, 2, 3).

The Ligier black marble quarries in Arizona, discovered in 1909 three miles south of the town of Dragoon, were considered comparable in quality to the famous quarries white marble in Carrara. Historian William Ascarza tells the story on portal Tuscon.com.

„Stabili Cambiamenti“ (stable changes) is the name Gumdesign gave a collection of receptacles in 4 types of marble. The design was developed by Gaspare Cusenza.

Italian ceramic machinery turnover in 2016 is estimated to have risen by 3.9% with respect to the 2015 figure of 1.982 billion euros (in turn up 8% on 2014). Exports continue to account for the largest share of the sector’s turnover, reaching 78.1% in 2016 (1.61 billion euros, up 5.8% on 2015). If these values are confirmed by the final data due to be published in June 2017, this will be the highest figure ever recorded for exports, according to a press relase by ACIMAC (Association of Italian Manufacturers for Machinery and Equipment for Ceramics).

„Intangibility Matters“ is the title of a conference about the intangible aspects of tangible cultural heritage assets to be held in Lisbon on May 29 – 30, 2017 (1, 2, 3).

Like massif cliffs, side by side concrete objects in the Tippet Rise Art Center in the US-State of Montana. These are installations with ties to art and which are meant to tie art in with nature’s landscapes. The Nature Park also comprises a concert hall.

Video of the month: designer Weng Shang Wei explains how he made the Heike Fashion Stone in China’s City of Hangzhou from black marble dust (Video, 1).