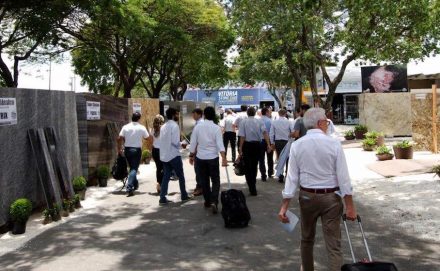 Since long time, exhibitors had been discontented with the February date due its proximity to carnival and Xiamen Stone Fair

The Stone Fair in Vitória, Brazil which had been canceled for the scheduled dates in February 2017 will now take place from June 06-09, 2017 at the usual venue (in the Carapina Events Center, Serra).

Originally, the event had been annulled due to a strike in the Polícia Militar which resulted in public security problems in the state of Espírito Santo.

The cancellation of cancellation is mainly due to Brazilian exhibitors’ wishes: Since years, stone producers had been complaining about the event’s proximity to carnival and to the stone fairs in Xiamen and Izmir as well as to Revestir for design and interior architecture in São Paulo.

Some saw February also as disadvantageous for Brazilian stone sellers: they said that at that time buyers’ stocks still were full as November used to be the preferred month for foreign importers’ stone shopping tours to the country.

In so far the June schedule may be understood as an experiment for a better date, as Alberto Piz, administrator of Veronafiere do Brasil, owner of the Vitória Fair, told Stone-Ideas.com during the Xiamen fair.

Curiously, this brings a concentration of stone fairs in the Portuguese speaking world within the first 2 weeks of June 2017: Fortaleza Stone Fair in the capital of Ceará state will take place from June 01-03 and Stone in Batalha near Portugal’s capital Lisbon from June 07-10. Later in August will follow the fair in Cachoerio aiming at Brazil’s home market. (pebe)

Links to all fairs