Online Exhibiton by the Getty Research Institute: „The Legacy of Ancient Palmyra“ 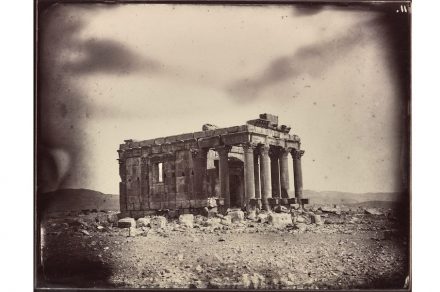 War in Syria has irrevocably changed the ancient caravan city of Palmyra, famed as a meeting place of civilizations since its apogee in the mid-2nd to 3rd century CE. The Romans and Parthians knew Palmyra as a wealthy oasis metropolis, a center of culture and trade on the edge of their empires.

An online exhibition of The Getty captures the site as it was photographed for the first time by Louis Vignes in 1864 and had been illustrated in the 18th century by the architect Louis-François Cassas. Their works contribute to Palmyra’s legacy, one that goes far beyond the stones of its once great buildings. 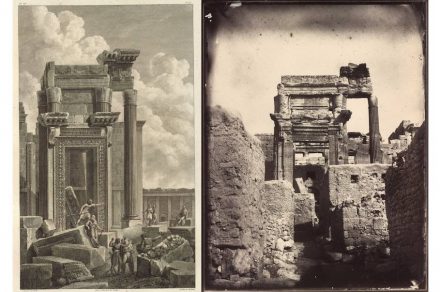 Among the monuments featured is the Temple of Bel, whose ruins were largely destroyed during the occupation of Palmyra in 2015 by the self-proclaimed Islamic State (ISIS). Also referred to as the Temple of the Sun or the house of the Palmyrene gods, it was one of the grandest architectural projects of the 1st century CE. As the cultural heart of the ancient city, this massive complex integrates a courtyard stretching 200 meters on each side that could accommodate thousands of people during religious festivals.

In 1784 French artist and architect Louis-François Cassas (1756-1827) traveled to the Eastern Mediterranean as part of a diplomatic mission to the Ottoman court. Arriving in Palmyra in May, 1785, Cassas assiduously worked to record the immense quantity of ruins scattered across the landscape until departing a month later with a caravan of 500 camels heading on to Baalbek in modern-day Lebanon.

Photographing the ancient ruins of Palmyra was the vision of French nobleman Honoré Théodore Paul Joseph d’Albert (1831–96), an exceptional savant, who in 1864 led a scientific expedition to the Dead Sea that included surveying the Transjordan region and exploring the famous rock-hewn city of Petra. For these investigations, he recruited naval lieutenant Louis Vignes, because of Vignes’ navigational skills and knowledge of eastern Mediterranean ports. After the completion of much of the mission, Luynes returned to Paris, leaving Vignes to continue to Palmyra, where he took over thirty photographs including three-part panoramas of the ruins.

„The Legacy of Ancient Palmyra“