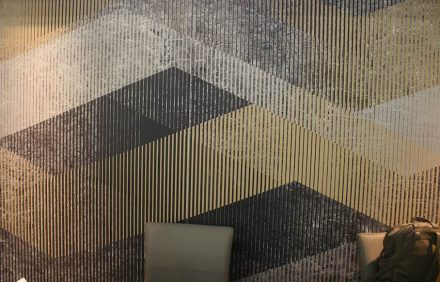 Wallpaper reminiscent of natural stone, but not imitating the appearance is the work of Italian manufacturer Londonart. The collection by the name of Modernity comprises a number of examples.

Side tables in a variety of shapes, some in natural stone, can be found on Matter’s online shop.

Marvel in marble: the Indian Temple of Rankpur.

Portuguese LSI Stone company criticizes architects and builders for their demand for uniform materials e.g. for façade cladding which turns resources into waste. „We must realize that the stone is a natural product and not a manufactured product, for this reason, it is impossible to be completely uniform,“ as said on the company’s blog. So: „We should value the stone as it is, as it was given to us by nature“ and „each stone is a piece of the history of our planet earth.“ LSI Stone is a major producer of Portuguese limestones and is under female leadership by Regina Vitório.

Portugal’s parish of Espinho held a conference by the name of „Granifair“ on April 28th 2017 where the local granite branch was presented (Portuguese).

A book about Portuguese Plastering (Calçada Portuguesa) in Macao was published, as a paper from there reports (Portuguese).

„Acid Shield“ is the name of a new protection of marble and natural stone developed by Italian company Pibamarmi. 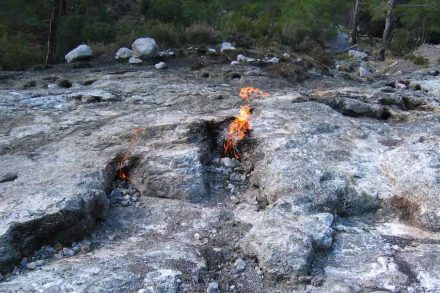 The fires of Yanartaş in the Turkish province Antalya draw their seemingly endless energy from subterranean gas reserves as recent research has confirmed. There are 15 – 20 such phenomena around the Eastern Mediterranean region. In ancient times it was believed that the monster Chimera spew the fire.

Iran Stone News entertains a portal in Arabic informing its readers on news in the stone branch of Iran. Managing director and founder is Mohammed Halajian who is also the project manager of the Iran Stone Expo in Mahallat (October 11th to 14th 2017).

The new Stone Fair in France , Rocalia (December 05-07, 2017) will highlight stone design. Exhibitors having realized furniture, wallings or floorings, table objects or lightings can show them in a special place at the fair or at their booths in a special presentation. A studied designer must have been involved in the production.

9th Iran Stone Exhibition (Irse) 2017 has recently published its dates: July 10-13 in Tehran. Last year it counted 170 exhibitors and about 12,000 visitors from 67 countries. The concessionaire is Stone Association of Iran, the organizer is Roshan Rooz company. Please find the link in our fair calendar.

Works of avantgarde-artist Giuseppe Penone, e.g. his rocks in trees, will be shown in the Palazzo della Civiltà Italiana in Rome until July 16, 2017. The building originates from the Mussolini era and is clad in travertine. Fashion brand Fendi, the organizer of the exhibit, has its headquarter there.

„28% tax on marble will ruin business in Rajasthan“ is the title of a report in the Hindustan Times due to the new Goods and Services Tax (GST) (1, 2).

Video of the Month: „Marble Lip Art“ is the newest rage in internet make-up. Most fans would prefer the Carrara-Look according to Teen Vogue (Video, 1).