Stone+tec 2018 will take place in Nuremberg, Germany from June 13th to 16th

The trade fair is the hub for the stone industry in Germany, Austria, and Switzerland which are among the wealthiest in Europe

Stone+tec 2018 trade fair will take place in Nuremberg, Germany from June 13th to 16th, in line with the extraordinary construction boom during recent years, especially in Germany. To attract architects, the organizers are planning special events like awarding the prizes of the German Natural Stone Association or special guided tours through the fairground.

Another topic of this 20th round of the fair will be countertops for kitchens and bathrooms with a special focus on tools and chemistry e.g. for processing and impregnation. It will „bring together all the elements that stonemasons need to successfully keep pace with trends in worktops,“ according to a fair’s press release.

Nuremberg’s location in the South of Germany makes it a hub for the German speaking countries being among the wealthiest in Europe.

Germany with a population of 81 million is of course the heavyweight. Since strong economic reforms after 2000, it has shown a continuous economic strength: the 2017 forecast of the German construction industry predicts a growth of +5% on average with housing reaching even +7%. In total, investments in housing are forecast to be € 42.9 billion. 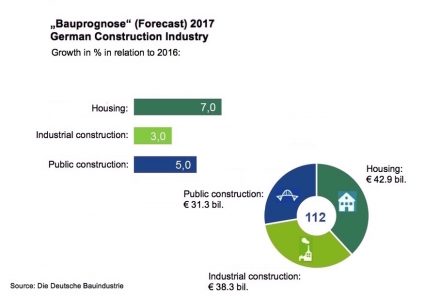 Germans also spent much money in reforming and upgrading their private houses and apartments. As interest rates are low and the jobs are safe, Germans prefer to spend their money instead of saving it as they traditionally used to do.
Switzerland is the second of the German-speaking countries. GfK market analyzers recently published the Swiss per-capita purchasing power preview for 2017: each citizen statistically has € 42,142 for consumption-related expenses as well as rent and living costs. The total for the purchasing power in the country sums up to € 350.9 billion.
Austrians as the third German-speaking population reach an average of € 22,597 per person in 2017. GfK reports a total of approximately € 196.6 billion.
By way of comparison, Germany’s total purchasing power amounts to € 1,827.5 billion due to its number of inhabitants (81 million) compared 8.3 million in Switzerland and to 8.7 million in Austria. In 2017, Germans are expected to have an average per-capita purchasing power of € 22,239.
Stone+tec also understands itself also as „a platform for meeting like-minded professionals and garnering new ideas“. A large program with lectures will be organized supported by BIV (Association of German Stonemasons) and DNV (German Natural Stone Association). Four thematic tracks – construction, monuments, gravestones, and design – will be offered.

Stone+tec receives international support from Confindustria Marmomacchine, the Italian Association for Natural Stone Working Machinery and Equipment. With over 15,000 trade visitors in 2015, the fair is the most important gathering point for the natural stone industry in central Europe.

Exhibitors can currently enjoy an early bird discount until October 31, 2017.