Dialogue House in Phoenix, Arizona by Wendell Burnette Architects: a place with a view of landscape and sky 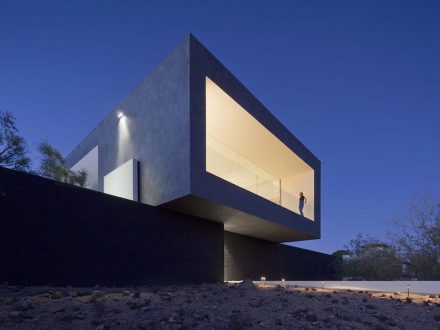 Three people and a house: a love story – initially unattainable for two of the players. That is the setting. Then they could finance the purchase and the latest move was to refurbish the master bathroom. Natural stone was the material of choice which brought the project to our attention. 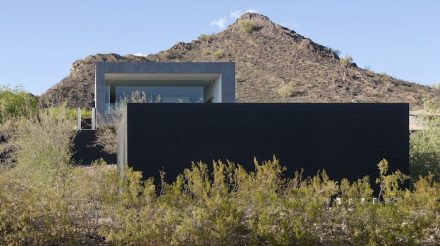 Dialog House is located on Phoenix, Arizona’s outer perimeter at the foot of Echo Mountain, i.e. on the rim of the Phoenix Mountains Preserve. The name was given to it by Architect Wendell Burnette, who designed and built it in the late 1990’s: both parts of the house are spectacular it their own right but quite distinct from one another, however they also have many similarities.

The upper story caught the eye of today’s owners Laura and Thomas Hyland back in 2004. In fact, the upper story is more like a box with an open side and a breath-taking view over Phoenix’ skyline, the mountain range, the Sierra Estrella and the South Mountain.

The couple liked to spend free time with friends at the foot of Echo Mountain to give them a glimpse of their dream as reported in „Dwell“-Magazine.

Dialog House only became a reality after the financial crisis for the landlord, a financial consultant and the landlady, employed in sales of a large enterprise.

The first step in 2010 was to consult the architects regarding the necessary renovation required after the rocky times and ensuing neglect.

Enter the second love story: the love of an architect to his seminal work for a private contractor. What a stroke of luck: Laura and Thomas Hyland wanted the house refurbished according to the original plans. 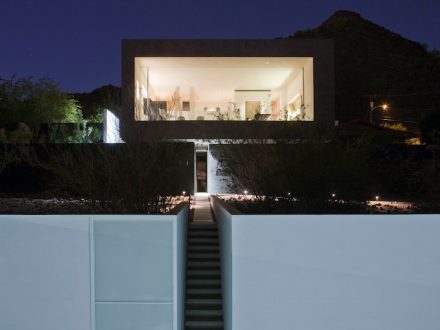 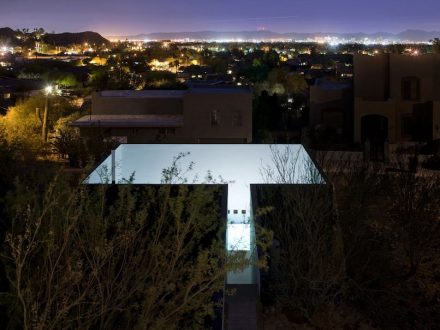 Take, for example, the swimming pool, which serves as a „dialog partner“ for the upper level: it, too, is a box a mere couple of feet lower – and, it, too, has a cut-out side, which opens skyward.

The walls are white-washed a four meters in height interspersed only with a few windows to afford a view over the city but entirely open upward toward the wide blue sky.

The top floor of the living area, also puts the wide open space into scene: kitchen, dining room and living room are all integrated in a loft space with appliances such as stove, refrigerator, and TV along the walls

The master bedroom is separated from the other living quarters by a wall. 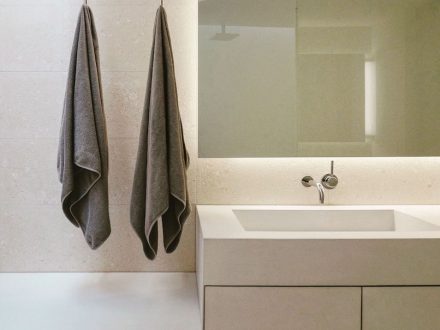 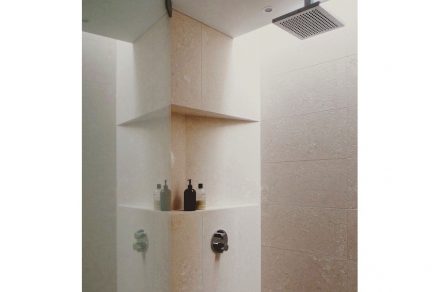 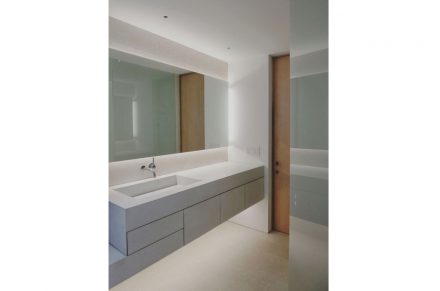 In contrast: the master bathroom on the upper level is tiny, what with its 7 m² (75 sq.ft.) even for American standards.

During the course of renovation, the owners leapt at the chance to create an illusion of more space by cladding walls in light Italian Bianco Avorio limestone. Thomas Hyland named more reasons for the choice of material: „First, we wanted to use natural stone as we felt this would add more warmth to the space. Second, we felt the color – and importantly, the consistency in color – of the Bianco Avorio stone would add lightness to the space. And lastly, we really loved the surface/texture of the stone … it has a beautiful tactile feel.“

Bianco Avorio was also used as flooring. The stone was supplied by Grassi Pietre Company of Italy. The sink is a special concrete construction.

Natural stone was also used as flooring in the living room and around the pool in two hues of Portuguese Gascogne Blue lime stone.

The ground floor accommodates work areas, rooms and two bathrooms as well as the garage. The over-all area of the house is 237 m² (2545 sq.ft.).
Landscaping also makes reference to the setting as originally planned by the designing architect. The coating on the façade is reminiscent of the mineral deposit on surrounding rock formations. 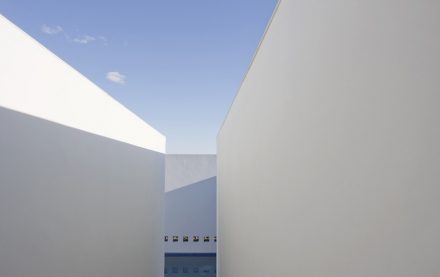 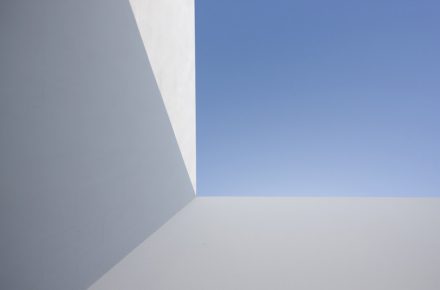 The architect’s website includes reference material of his sources of inspiration. „The Desert – Further Studies in Natural Appearances“ by John Dyke (1907) was one such source. It describes light in the desert and how different it is from luminescence in other landscapes, hot light looking straight ahead during the day and cold light at night when gazing at the stars, and „colored air“.