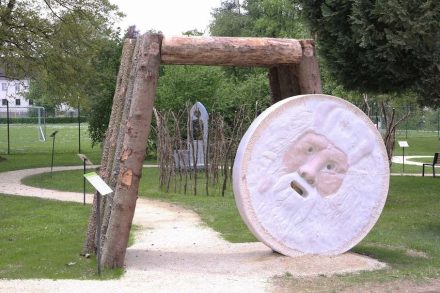 In a concerted effort in cooperation with sculptor Arnold Reinthaler, the aim of the presentation was to boost awareness of craftsmanship

This year’s Upper Austrian Horticultural Show in Kremsmuenster features a stonemason’s presentation, in which traditional tombs and graveyard monuments were brushed against the grain: it included artistic critique of grave design over the span of two millennia of Christianity imbedded in a course dubbed „Christian Tombs in Transition“.

Some of the monuments were provocative.

The impulse was given by the State Stonemasons’ Gild and began with a call for participants. Thirteen master craftsmen took part.
The concept was the work of sculptor and stonemason Dr. Arnold Reinthaler.

We describe the individual works below.

One of the ideas behind the project was to explore new roles of the stonemason in graveyard landscaping. Reinthaler sees it as that of an „artistic designer of high-end mementos“ rather than that of a seller of mass-produced gravestones. 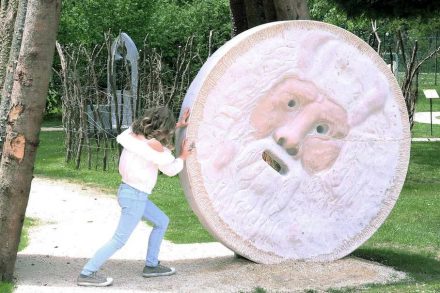 Helmut Moser: „Grave of Jesus Christ“ (33 a.D.) at the start of the parcours. The boulder originally blocking the grave is here an antique Bocca della Verità. There was a saying originating from Medieval times according to which he who lies, puts his hand in his mouth and is bound to lose it. 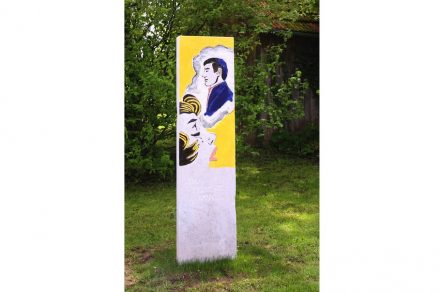 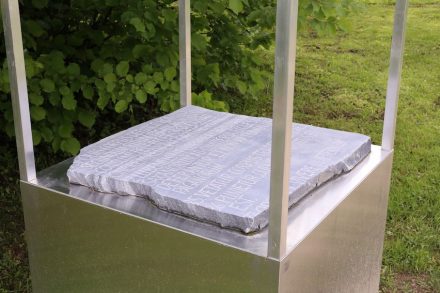 Hans Paar, „Medieval Law“: in 785 a.D. Karl the Great issued the Edict of Paderborn forbidding cremation and commanding burial around the church. Contraventions result in the death penalty. The two key rules are chiseled in stone. 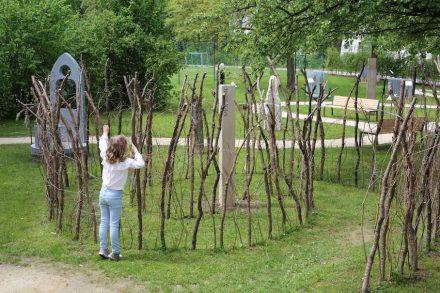 Raimund Fuchs, „Isolation and Exclusion“: at the peak of the Middle Ages graveyards had become the final resting place – however it was not accessible to all. Paupers, non-believers, criminals or those working in dubious lines of employment were excluded. 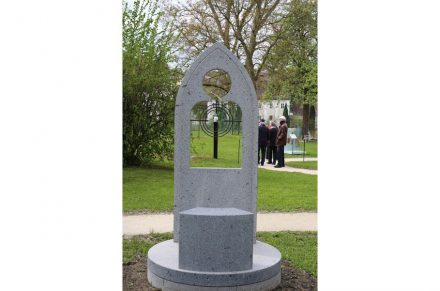 Thomas Pilsl, „Gothic Peilstein“: in the Middle Ages it was deemed very important to place the grave close to the remains of a Saint to the church. The parcours has no such ambitions: the end of the route is the present. 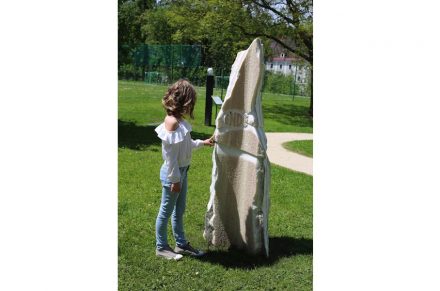 Rudi Wienerroither, „Typeface of the Renaissance“: The Renaissance marks the beginning of standardization of typeface and the names of the deceased were chiseled in stone. 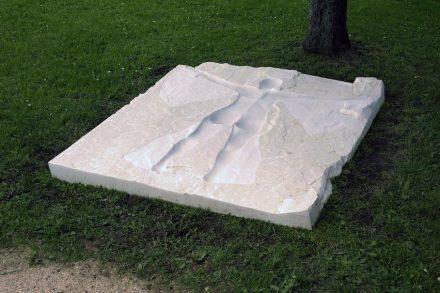 Norbert Kienesberger, „All are equal in death“: in the Renaissance bodies were measured and imprints were made. Here an imprint in form of a snow-angel formed when a person lies in the snow and waves arms and legs. The imprint looks like an angel. All are welcome to try it for themselves. 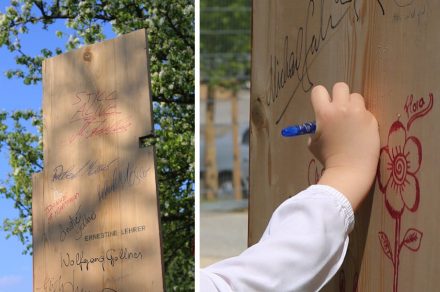 Ernestine Lehrer, „The death-bed“: in early Baroque times, the dead were simply laid out on boards. Here such a board is stood on end – visitors are encouraged to write their name or a phrase on to call it to memory for all times. 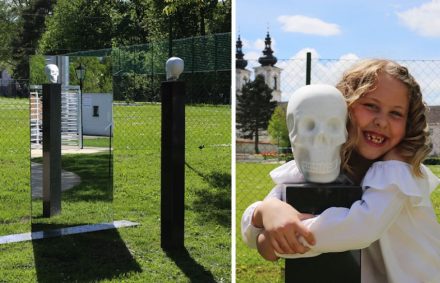 Erich Trummer, „Dear Death and I“: at the peak of Baroque symbols for transience (vanitas) came into fashion in graveyards. Particularly the skull – here in marble – placed on a stele or column. Visitors can stand next to it and see an image of both and their inevitable fate in the mirror. 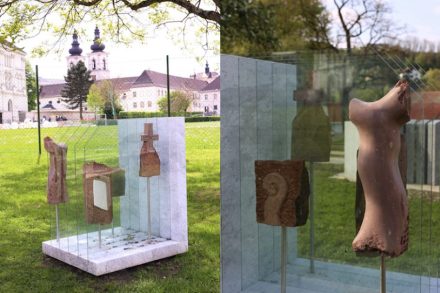 Stephan Pointner, „The Bourjois Graveyard Park“: In the 19th century Industrialization appeared in graveyards. Graves are adorned with mass-produced gravestones. 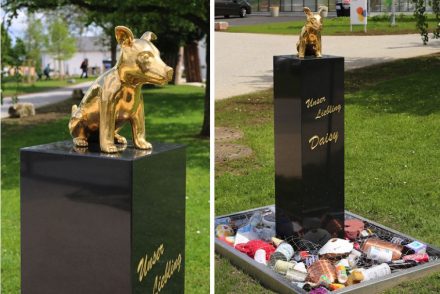 Michael Gruber, „Human Dignity“. The lap dog reflects the Biblical Dance around the Golden Calf. At the foot of the stele: refuse with chards of urns. The Catholic Church allows cremation since 1963. 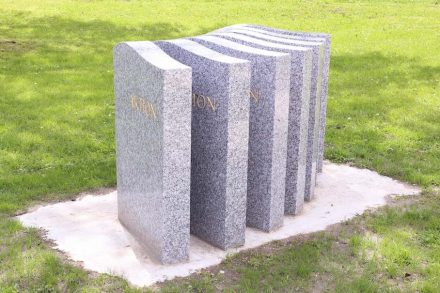 Ortrun Skala, „Class in Masses“: gravestones have been mass-produced since the 1960’s ready for use and delivered straight from Asia. Since then, stone masons began to mutate to mere sales representatives rather than craftsmen and designers. 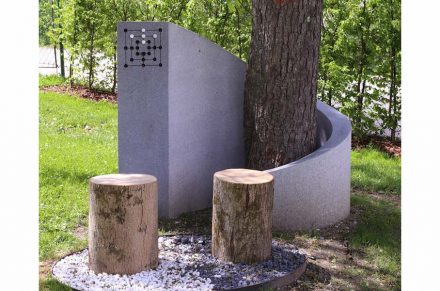 Bernhard Baumgartner, „New Alternatives to Stone“: the graveyard of the future is seen as a meeting point for people to remember the dead but also to spend time together. At the top of the gravestone a game of Nine Men’s Morris. The idea is that visitors can purchase pieces to play which they subsequently take home with them to remember the day. 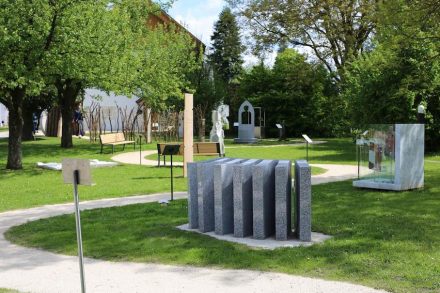 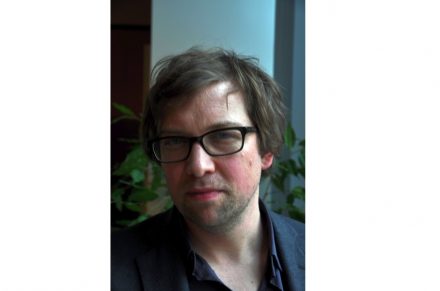 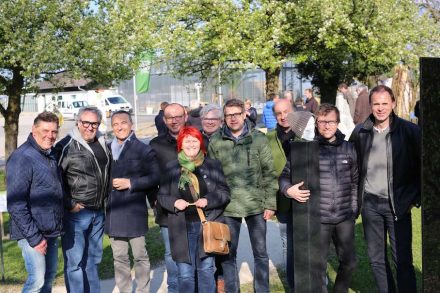