„Leonardo, Michelangelo, Raphael around 1500“ in London’s National Gallery until January 2018 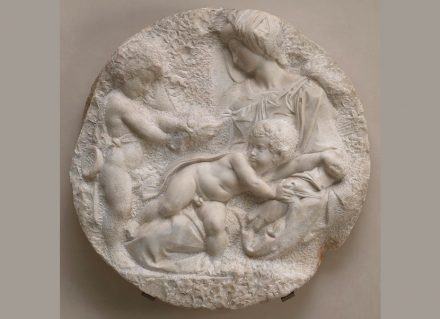 „Leonardo, Michelangelo, Raphael around 1500“ brings together eight works by Leonardo da Vinci (1452–1519), Michelangelo Buonarroti (1475–1564), and Raffaello Santi, or Raphael (1483–1520) in the London National Gallery until January 28, 2018. These three artists were keenly aware of each other’s work and at times intensely rivalrous. Together they are credited as fathers of a new, dynamic, monumental, and psychologically incisive approach to art – the High Renaissance.

In 1501 Leonardo exhibited a now lost full-size drawing of the Virgin and Child with Saint Anne. The artist’s animated, mobile figures impressed the younger Michelangelo who adapted them for his marble ‚Taddei Tondo’ (1504–05), imbuing them with an emotional expressiveness alien to Leonardo’s otherworldly approach.

Raphael not only quickly assimilated Leonardo’s style but also made drawings after Michelangelo’s works, including the tondo; integrating Michelangelo’s emotive dynamism into his own harmonious, idealized artistic style.

The centerpiece of the entrance-free display is ‚The Virgin and Child with the Infant St John’, also known as the Taddei Tondo (1504–05). It is presented alongside seven choice works from the National Gallery Collection to tell the story of how the „The triumvirate of the High Renaissance“ inspired each other in their revolutionary approaches to art around the turn of the 16th century: how they learnt from each other, stole from each other, and worked in opposition to each other – respectful friends and acrimonious rivals.

Matthias Wivel, the National Gallery’s Curator of 16th-century Italian Paintings says: „Sculpture is so crucial to the development of visual art at that time and the ‚Taddei Tondo’ provides a key to understanding Michelangelo’s evolution as an artist, following but also rejecting Leonardo’s example, as well as for the young Raphael’s development of a more expressive, dynamic style in synthesis with what he was simultaneously learning from Leonardo.”

The other Michelangelo works featured in the exhibit are ‚The Virgin and Child with Saint John and Angels’ (The Manchester Madonna, about 1497) and ‚The Entombment’ (about 1500–1).

There are three works by Raphael in the display – ‚The Madonna and Child with Saint John the Baptist and Saint Nicholas of Bari’ (The Ansidei Madonna) (1505), ‚Saint Catherine of Alexandria’ (about 1507) and ‚The Madonna of the Pinks’ (La Madonna dei Garofani) (about 1506-7).