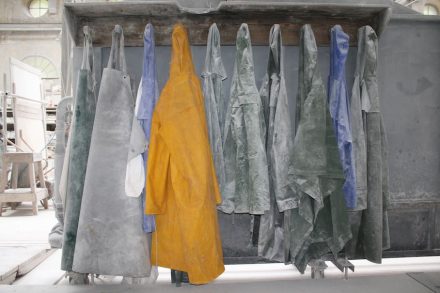 In part the issue involves quartz composite materials in particular, and in part general labor protection is the topic of interest

Suddenly labor protections in the stone sector is a world-wide theme of interest. At issue: crystalline silica as a residual of working quartz composites, as well as new labor laws in the USA and Europe. We reviewed publications on these themes.

In Australia, a stonemason filed a suit against ten producers of quartz composite materials which he claims are responsible for his affliction with silicosis. The British trade magazine Stone Specialist reported on the case on its website (see link below).

This type of material contains some 90 % quartz, twice as much as granite often used for kitchen countertops.

The Australian stone mason in question, who also blames his rheumatoid arthritis on inspiration of crystalline silica, maintains that no-one warned him of the dangers. The Stone Specialists quotes him: „A lot of companies still do cut dry.”

We note: producers’ instructions clearly state that this should not be done and recommend the use of respiratory protection and vacuum systems.

In real life, it would seem, that many countries disregard these safety instructions altogether.

El Pais reported (June 2016) cases of silicosis, some of which lead to death, in stonemasons’ production sites in Spain.

The New York Times had reported similar cases in Israel in April 2016. Here, too, labor conditions were at issue where quartz composite materials were being worked.

Recently the online trade magazine Focuspiedra (Spain) had reported on the issue from a producer’s vantage. It published an interview with a stonemason with a total of 40 workers, six of which had contracted silicosis. He expects claims of some 200,000.00 € for each case not to mention the criminal charges which might be brought against him.

He claims that the producer brought a dangerous material on the market condoned by the authorities. Small companies now faced hitherto unforeseen high costs of labor protection.

In the USA and Europe, too, crystalline silica is an issue with stonemasons albeit not specifically with regard to quartz composites.

The Occupational Safety and Health Administration (OSHA) passed the law despite resistance stemming among, others, from the Marble Institute of America (MIA) and the Building Stone Insitute (BSI).

Europe’s judicial authorities are currently discussing similar actions albeit with more lenient limits. The European Commission is discussing setting the permissible level of dust particles at 100 micrograms per cubic meter of air.

As we had recently reported, some country already have a lower permissible limit in place. But in many countries, particularly small enterprises are facing serious problems should the draft become law.

In July 2017, the representatives of the sectors affected by the new arrangements agreed on a joint recommendation to the politicians in Brussels: 100 micrograms per cubic meter of air. „The fight to find the agreement was difficult”, Professor Gerd Merke from Euroroc comments, „the issue kept us busy for many months and needed all our staff capacity.“

Latest news: from Brazil we get news that their quartzites are very much demanded on the world markets. Quartzites have a much higher share of quartz than marble or granite.