At Marmomac, stone sculptor Jago was awarded „Master of Stone“ in the tradition of Verona’s Ancient Guild of Stone Arts 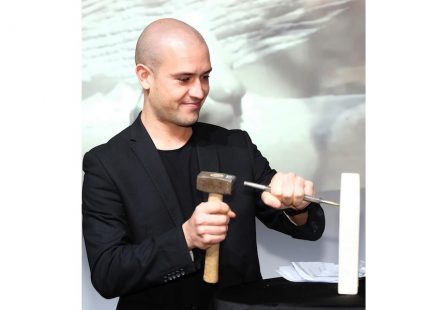 He „merges the past and tradition with creativity, inventiveness and modern vision“, according to the jury

Artist Jago Jacopo Cardillo received one of the „Masters of Stone” awards during Marmomac 2017. He’s a young sculptor from Frosinone in the North of Rome and is better known as artist Jago.

Marmomac’s jury awarded him „for having merged the past and tradition in his works with creativity, inventiveness and modern vision. His skilled hands turn marble into something very much alive and warm. It is astonishing to see how stone is worked and moulded softly by the knife blade and the oxymoron that comes about envelops the work of art with great charm to achieve innovative modernity as well as uniqueness“.

One of his latest works is „Habemus Hominem” finished 2016 referring to Pope Benedict. A video of the process of sculpting starts with a bust of Cardinal Ratzinger which is chiseled into the old Pope by the artist until we see the skinny upper part of the geriatric body.

In many of his works, the 30-year-old artist confronts the spectator with unusual comments on the modern world with its wide-spread poverty or its disrespect of humanity, among others.

In the self-präsentation on his webpage, he mentions that he attended the Accademia di Belle Arti in his hometown „without finishing his studies“. Yet in 2011, he was selected for the Italian pavilion at the Biennale d’Arte in Venice.

The Master of Stone awards is meant to continue the tradition of the Ancient Free Guild of Stone Arts in Verona dating back to 1319. The insignia is a cube of Verona red marble with a bronze plaque of the Guild and a silver chisel.