From June 27th to 30th the 18th edition of the Stone Industry Trade Fair (formerly Expostone) took place in Moskow. 282 exhibitors from 18 countries were represented with 7144 visitors attending, of which 511 came from abroad from 41 countries. More per download in the fair’s post release. The next edition is scheduled to take place from June 19th to 22nd 2018 (post release, 1).

Anderson Speakers is a British company producing speaker boxes made of natural stone.

Friends & Founders is the name of a designer duo from Denmark whose collection includes objects in natural stone.

1st Jakarta Stone Fair is scheduled from November 22-25, 2018 in Indonesia’s capital. Organizer is Turkish tg expo. The country’s construction show IndoBuildTech in May also has a section of natural stone. Links in our calendar of stone trade fairs worldwide.

„Onyx“ is the name of a new engineered stone from Corian.

Almost 400 previously undocumented stone structures known as ,Gates’ in Saudi Arabia have been identified by a researcher at The University of Western Australia using Google Earth imagery. „You can’t see them in any intelligible way at the ground level but once you get up a few hundred feet, or with a satellite even higher, they stand out beautifully,” as said Professor David Kennedy, a researcher in Classics and Ancient History.

Niki and Zoe Moskofoglou are sisters from Greece working in London and Athens as artists and designers. Their material of choice is local marble.

A man was killed after a slab of granite struck him during an uploading process, according to US-Elbert County officials. 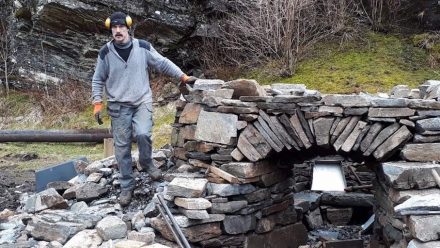 A team of Norwegian experimental archelogists has built a limekiln of the classic Roman/Medieval type, filled it with 2.5 tons of local marble and started burning. The resulting quicklime (burnt marble) will now be tested at several restoration projects. Per Storemyr, one from the team, has the story and photos in his blog.

Since autumn 2017 German machinery producers Burkhardt-Hensel and Löffler Engineering+Service have a common logo and use „Burkhardt/Löffler“ as name, according to the news ticker of Stone+tec, Nuremberg (German).

In its Home&Garden section, The Washington Post discusses how to repair a pebble walkway.

Restoration of New York’s famous Equitable Scyscraper includes an update of the grand entryway. The edifice with façades clad in limestone is an icon of Manhattan.

Video of the month: What a story: A long lost marble bust of sculptor Auguste Rodin showing Napoleon Bonaparte was discovered in the town hall of Madison, New Jersey. It had been standing there for some 80 years. By chance, a history student discovered the inscription „A. Rodin“ in the piece and started a research (1, 2).