Mies van der Rohe’s Barcelona Pavilion is famous for its openness with walls that are only dividers of the space and not structures bearing the roof. The various types of natural stone used for these walls and the floors, especially the famous onyx book-match, play an important role in the expression the building has.

So, a question might be: How would this expression change if the materials at the walls and the floors were altered?

Artists Anna and Eugeni Bach give an answer to this question. In their project „Mies Missing Materiality” on invitation of the Fundació Mies van der Rohe they covered all surfaces with white vinyl rectangles. The process of change started on November 08 and was completed November 16 when the pavilion was completely in white.

On November 27, the intervention will finish by removing the white plastic, restoring the materiality that belongs to the building.

In the words of Ivan Blasi, Curator of prizes and programs of the Fundació Mies van der Rohe, „it is a unique opportunity in life to see the Pavilion in another state and to think about the role that materials play. The Pavilion cannot be an inert object, its reconstruction implied its continuous transformation.” 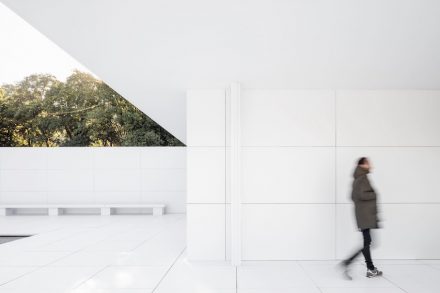 The original of the pavilion had been erected by German-American architect Ludwig Mies van der Rohe (1886-1969) for the World Exhibition 1929 in Barcelona. As „German Pavilion“ it served as self-manifestation of the Weimar Republic which followed World War I and proceeded the Nazi Regime in Germany. The construction was something completely new at that time emphasizing modernity.

After the exhibit, the pavilion was demolished, yet 1986 reconstructed by the city of Barcelona.

Under the title „Dressing the Mies van der Rohe Pavilion to strip it of all materiality“ Anna and Eugeni Bach write: „This simple act turns the Pavilion into a 1:1 scale mock-up, a representation of itself that opens the door to multiple interpretations about aspects like the value of the original, the role of the white surface as an image of modernity and the importance of materiality in the perception of space.“

„The Pavilion in Barcelona upon which we act is a reconstruction, a replica so faithful to the original that it is often difficult to remember its true nature. A building that should have been temporary was immortalized first by the written account of the modern movement and later by its own reconstruction.“