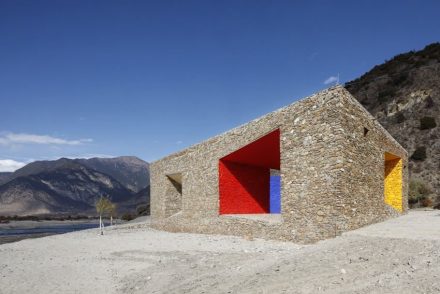 The Alvar-Aalto-Medal 2017-award winner was Chinese architect Zhang Ke of ZAO/standardarchitecture. Zhang Ke impressed the jury with his concept of sustainable architecture in keeping with regional traditions and implementing local material. One of his works is the Niyang River Visitors’ Centre, on which we had reported in a previous edition. The prize commemorates the Finish architect and was presented for the 13th time at a jubilee seminar marking 50 years since founding of the award (1, 2).

Geo-Archeologist Per Storemyr has published a photo-documentation showing the gradual effect of freezing temperatures on stone and ensuing erosion.

Our Calendar of Symposia and Festivals of natural stone has been updated.

A spectacular hiking trail is the Caminito del Rey along the Gaitanes-Chasm in the Iberian Province of Malaga. Some 100 m above the water and stretching along 7 km, the trail offers a breath-taking view of the canyon. The trail purportedly required minimally invasive boreholes for its construction.

The World Economic Climate improved in all regions of the world, according to the World Economic Survey of the German IFO-Institute. Both assessments of the current economic situation and expectations rose particularly sharply in the USA, the European Union and in emerging and developing countries in Asia. In Latin America assessments of the current situation improved significantly, but expectations deteriorated slightly.

How ancient marble statues were painted and the importance of color is the subject of a research project now published.

Trouble is brewing around the „Geoscience and Society: Bridges to Global Health, Resilience and Sustainability“-Conference scheduled to be held in September 2018, according to Greg Wessel one of the organizers of Geology in the Public Interest: Hamilton, Bermuda is the chosen venue but the government is currently considering a change in policy and new legislation to ban same-sex marriage. This would contravene the US-American and British Organization’s declared code of ethics. Watch for news on a change of venue on the American Geophysical Union’s homepage. 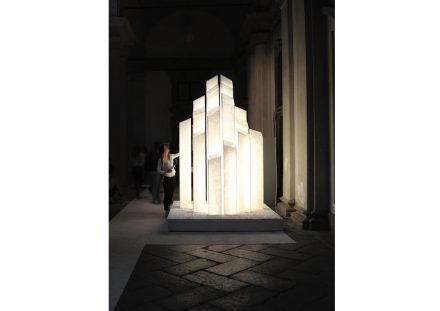 Italian architect Marco Piva’s installation „City of Light“ shown at the 2017 Milan Design Week won an Honorable Mention in the Lighting Design Awards. It emulates skyscrapers made of thin Sivec marble on a honeycomb porter lit from inside (1, 2).

The Washington Post has a report how to repair kitchen countertops after years of usage.

The Hindu has a report about stone windowpanes in hot climate zones (1, 2).

Japanese artist Akie Nakata paints stones she finds and turns them into animals.

Italy’s producers of quarry machines have replaced China from the first place as provider for the Egyptian market, according to the study „Marble and Natural Stone in Egypt“ by Dr. Carlo Montani. In 2016, the turnover of Italian firms was 9 million € corresponding to 47,3% of the market in Egypt. The data were presented previous to Marmomac Samoter Egypt, a b2b-meeting for Italian and Egyptian firms organized in February 2018 by Veronafiere in Cairo (Italian).

Genstone is a US-producer of faux stone veneer panels.

Video of the Month: a 12 m-high statue with a mass of 80 t depicting Pharaoh Ramses II was maneuvered to its representative position at the entrance of the Egyptian Museum near the Pyramids of Giza. The museum is scheduled to open to the public this year (1, 2).