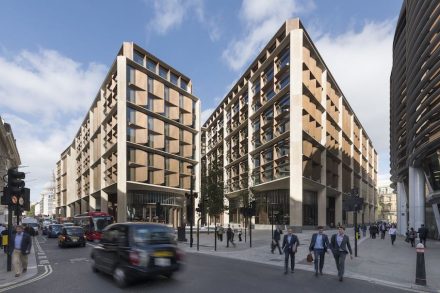 The aim was achieved: particularly the sandstone-clad pillars towering 8 stories high and which – or so one could imagine – might support the entire Globe as did Atlas the Greek Titan. The impression is enforced by cross-members spanned between glass surfaces.

The triangular shapes convey the impression of „gills“ outside the windows, according to Foster + Partners. The surfaces impress by their bronze finish and serve to protect from heat and noise. Most importantly they contribute to a refined concept of sustainable and energy-efficient air circulation. 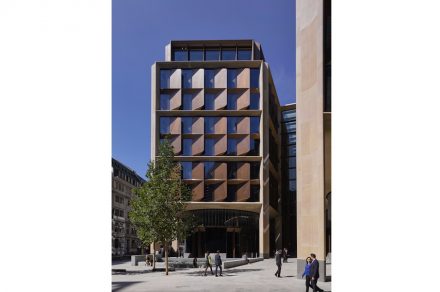 It is the most important measure and the one which led to the title of the buildings BREEAM-certification as „outstanding”, a first for any office complex in Great Britain.

Another important stepto reach this certification was the 9,600 t of sandstone originating from Derbyshire close to the building site. The bronze cladding was manufactured in Japan. 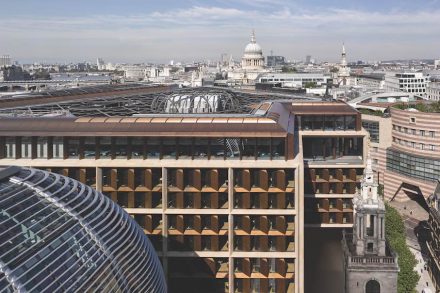 According to the architect, the design of the Bloomberg European Headquarters was conceived to endure and improve the surrounding City of London Public realm. Adjacent Victorian buildings are made of the same stone. Close by: Saint Paul’s Cathedral is an exemplary and outstanding building made of Portland Limestone.

„We wanted to create a perfect recognizably British building which, at the same time, respects London tradition“ the architect sums up. 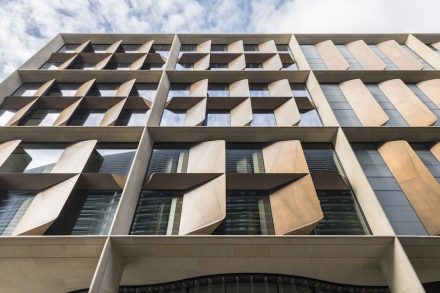 The building also restores some of the original London City map which had been lost following some of the mid-20th century construction: two overbuilt antiquated streets were remodeled to form a passage to the Bloomberg-Complex and gained a new lease on life in form of a mall with boutiques and restaurants. 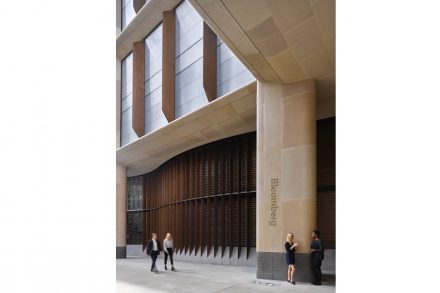 More history unravels in a complete block were the Walbrook flowed. The former brook has found other paths or disappeared underground but the entrance includes three pools and a man-made brook with ample flow and flora just as a wild creek would provide. The concept is the work of Iberian artist Cristina Iglesias.
Note the ramp on the interior of the building leading along 6 stories upward. The ceiling is clad in patterns derived from nature. They incorporate lighting, protect against noise pollution and help the air circulate. 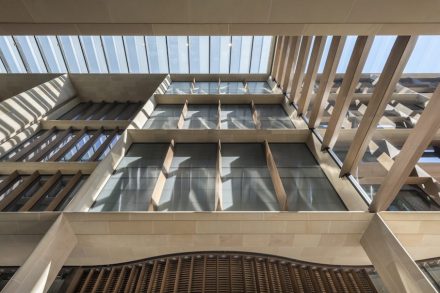