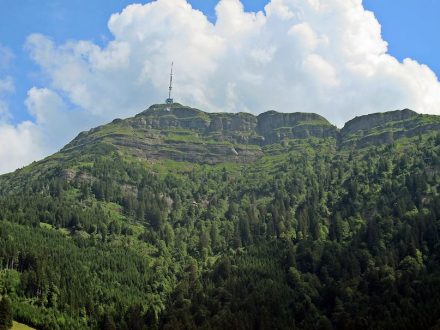 Until approximately 30 million years ago, before rising, they landscape had been a flat and hilly scenery

Rock avalanches and torrents started to form V-shaped valleys in the Alps approximately 25 million years ago. The modern landscape contrasts to the flat and hilly scenery, which characterized the Alps a few millions of years before. Geologists from the University of Bern applied digital technologies to unravel these changes in landscape evolution. They analyzed 30 to 25 million-year old lithified rivers in Central Switzerland and came out with a detailed picture of how the Alps evolved within a short time interval.

The current shape of the Alps with steep V-shaped valleys and torrents have evolved during approximately five millions of years. This time span might be perceived as very long, but it is a few seconds for geologists. This was the major outcome of a study by Philippos Garefalakis and Fritz Schlunegger from the University of Bern, Switzerland, who analyzed thousands of pebbles at Mount Rigi situated in Central Switzerland.

This mountain, which has been considered by Goethe as the Queen of the Mountains, because of its spectacular view, consists of lithified rivers with pebbles. These rocks have been transported by the Alpine rivers in the geologic past, and they document the rise of the Alps and the related change of the landscape.

The scientists found out that the Central Swiss Alps evolved from British-type of hillslopes and flats to a rugged region with torrents and deep gorges. The results of their study have recently been published by the Nature-Group in „Scientific Reports“.

30 million years ago, the headwaters of the Alpine rivers were situated on a plateau with flat hillslopes, similar to what we currently find in Great Britain. „The leisurely streams deposited tons of pebbles, which resulted in a stack of thousands of lithified rivers, referred to as conglomerates“, explains Philippos Garefalakis, the senior author of the published article. „Accordingly, each bed represents the deposits of a river back in geologic times“.

Philippos and his team analyzed bed by bed and thousands of pebbles from the base to the top of Mount Rigi. The changes surprised the scientist. „The 30 million-year old deposits at the base of Mount Rigi contain pebbles that have the size of an apple, and the streams were 2-4 meters deep. On top of the mountain range, the 25 million-year old sediments expose boulders as large as a football, and torrents were less than 1 meter deep“. The Alpine streams must have gained in power, and they adapted a chaotic flow pattern.

„The change in the Alpine landscape must have been dramatic and fast“, explains Philippos and looks toward the Alps, which are clearly visible from Bern on a sunny day like this. „Boulders as large as a football can only be entrained by strong torrents during floods.“ These processes are typical in a steep landscape where rock avalanches and landslides supply large volumes of boulders and material.

The Alps thus had their current shape as early as 25 million years ago. The situation, however, was different 30 million years ago. Streams had been smooth and had had their headwaters in a meadow countryside, which characterized the Alps at that time. „These changes occurred as the Alps started to rise and to steepen, which occurred – for geological standards – within a short time interval.“