Limpets know about the state of their stone-like shells and are capable to repair the lime, in case of damage 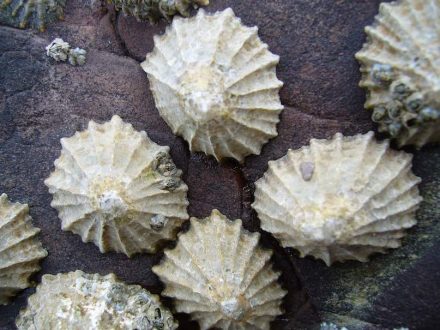 „These simple marine organisms can react in a very subtle and clever way,“ a Trinity College Dublin scientist says

Limpets (Patella vulgata) are little ubiquitous on stony patches of beaches in many parts of the world. Their conical shell made of lime gives them an almost impenetrable stone-like protection against predators or strong waves. Bioengineers from Trinity College Dublin now have found out that these simple marine organisms are even capable to detect minor damage to their shells with surprising accuracy before remodeling them to make them stronger.

In many ways, the way they heal is similar to the way broken bones mend in mammals.

The scientists discovered that the apex of a limpet’s shell acts like the „crumple zone“ of a car, by taking the brunt of any major damage to protect what’s inside. What most surprised them, however, was that limpets that experience shell damage seem to know or sense this – and, unlike typical car owners – actively carry out repairs themselves, by depositing new biological material to repair structural weaknesses and restore former mechanical strength.

The research, led by a team from Trinity College Dublin, has just been published by the Journal of the Royal Society Interface. 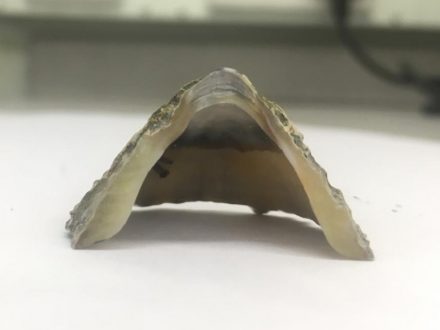 To assess how limpets reacted to damage, the researchers simulated some of the stresses they experience in the wild from rough seas and moving rocks/debris (by dropping weights); general abrasion and shell weathering (by using a metal file); and from attacks from predators (by using a nail to create a small hole in the apex). The limpets reacted to these stresses by repairing their shells from within, and while after 60 days the shells were never as thick as before, they had regained their former protective strength.

Co-first author, Maeve O’Neill is a PhD Candidate in Trinity’s School of Engineering. She said: „The way they do the repair is essentially similar to how bones heal in mammals, as the process is at least partially carried out by the deposition of new material.”

Professor of Materials Engineering at Trinity, David Taylor, added: „We’ve studied healing before, in human bones and also in the exoskeletons of insects, but we were amazed to discover that these simple marine organisms are capable of reacting in a very subtle and clever way.“

The shell of a limpet is a wonder of evolution. It gives the animal inside a perfect adaptation to its environment, the intertidal zone: limpets living closer to the beach mostly have higher shells as it gives them space to store some water with oxygen during ebb tide; limpets living deeper on a rock have flatter shells as they have to stand stronger waves.

These animals feed on algae which they rasp from the rock with their teeth. They wander short distances on a slime which gives the animal an orientation to find the way back to its location and also supports new algae to grow.

Limpets even defend their location: they push competitors away by ramming them like a bulldozer.

Journal of the Royal Society Interface