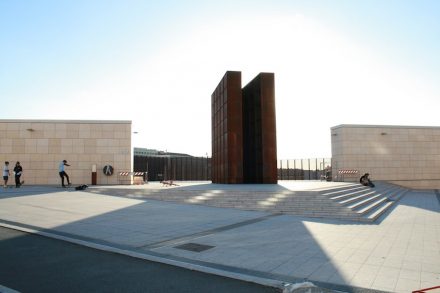 Above the new International Railway Station of Bologna stands a Shoah Memorial. Its base is comprised of granite slabs, the side walls are clad in limestone. 10 m-high walls of Corten-Steel in the center simulate bunks as they were provided in concentration camps. From the back grid of the bunks with basalt gravel visitors can look down on the tracks. The railway was the means of transporting people to the concentration camps in Nazi Germany. The memorial was designed by SET of Rome. http://www.set-architects.com/bologna-shoah-memorial.html

The Georgia Guidestones are gigantic granite slabs near Elberton in the USA Granite-County. Obscure and mysterious tales spin around the erection of the monument.

„Homage to Hidetoshi Nagasawa“ is the title of an itinerary through the city center of Verona where 5 marble sculptures of the Japanese artist are exposed until January 06, 2019. He died in March 2018.

Ventilation in large underground quarries is a topic in Marmomacchine Magazine (No 259).

The black granite at the Battle Born Memorial in Carson City, NV has been seriously damaged by 4 teens with Razor Scooters and BMX bicycles. Repairs might cost upward of $45,000. The memorial honors fallen Nevada military (1, 2).

Burning sea shells to make quicklime once was a tradition in the North-Atlantic region. In Millstone Park, Hyllestad (W-Norway), archaeologists from the University of Bergen have built two limekilns, reviving old lime burning traditions.

A mask made of pinkish-yellow limestone resembling a human face was discovered in Israel. It dates back about 9000 years to the Neolithic era when hunters and gatherers became settlers. 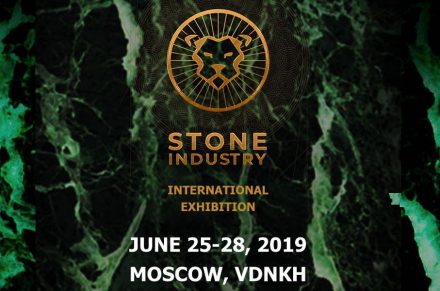 „Stone Industry“ fair in Moscow (June 25 – 28, 2019) will have its 20th birthday. Is was started in 199 under the name of Expostone and had reached in its last issue over 250 exhibitors from around 20 countries. In 2019, it will showcase natural stone from quarries in Russia and former states of the Sovjet Union (CIS) – marble from Ural and Dagestan (Caucasus), granite and gabbro-diabase from Karelia (Northern Russia), granite from Ukraine, Kazakhstan and Uzbekistan, limestone from Kyrgyzstan, travertine from Armenia as well as natural stones from Brazil, China, Finland, India, Iran, Italy, Montenegro, Portugal, Spain, South Africa, Turkey and more.

The expansion of the Sydney Modern art gallery will have façades clad with warm-toned natural stone to complement the sandstone walls of the existing buildings and the landscape around (1, 2).

Six ruined castles from the UK digitally reconstructed are shown on a webpage.

Members of the Italian Torlonia family are in an inheritance feud about assets worth nearly two billion euros among them 620 Greek and Roman marble busts and statues.

„Visit the islands where most Greek marble statues were made“ is the title of a report about the Cyclades in the National Geographic magazine.

Portuguese marble quarries in the regions of Borba and Bencantel are in risk of breaking walls, a hydrogeologist and professor at Évora University said after a landslide which killed two (Portuguese).

Video of the Month: a film about the historic Leuco-Granito de San Pedro quarries near the Spanish city of A Coruña tells of the particularities of the material and its implementation.