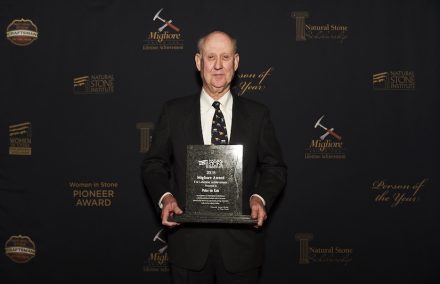 The Natural Stone Institute informs: „Peter de Kok from GranQuartz company is the recipient of the 2018 Migliore Award for Lifetime Achievement. As one of the Marble Institute of America’s (MIA) earliest members and a long-time member of the Building Stone Institute, it is highly symbolic that de Kok becomes the first recipient of this award since the merger of the two associations.

Peter de Kok’s career in the natural stone industry began in the 1950s with his father, Theo, importing Impala granite from South Africa to Europe and North America. That eventually expanded into the introduction of numerous other stones into these markets. It was at this time that Peter had the good fortune of interning with Deutsche Steinindustrie AG, providing him an opportunity to experience first-hand the stone technologies being developed in Europe.

Peter would later be instrumental in getting little known stones specified for high profile projects in iconic North American cities. New and exciting natural stone colors were being discovered by the building trade and producers of monuments, but stone in the kitchen countertop business was yet to come.

Peter launched GranQuartz Trading, Inc. in mid-1970 in Atlanta, Georgia, and began introducing new machining technologies. A new factory would then begin developing efficient diamond tools to affix to these machines. The stone workshop would become a faster, cleaner, and healthier place to work, giving the industry a more positive image for future job seekers.

It was also at this time that Peter began a long-term commitment to multiple stone associations, predominately the Marble Institute of America and Building Stone Institute. He was constantly looking for opportunities to innovate the quarry segment. In 1986, there were no trade shows yet in North America for showing large capital equipment. If a buyer wanted to see the new technology, it required travel to Europe in order to witness the advantages of the new trends.

Peter provided substantial support for the creation of StonExpo and later served multiple terms on the StonExpo Federation.

De Kok’s support of multiple industry initiatives during this decade, including a five year term on MIA’s board of directors, is impressive. Since his semi-retirement in 2012, he has been a constant advocate for the supplier community, the need for better industry data, advancement of the Women in Stone program, and the call for an industry check-off program.

When asked why it has been so important to give back to the industry, de Kok replied: „The industry was very good to me, so it seems reasonable to me to try and support the associations in any way possible to help them and the industry grow. To be honored by my peers in this way gives me tremendous pleasure. I am proud to have played a small part in the industry.”