Arcolitico by Raffaello Galiotto: „a door towards the next age in the history of stone“ 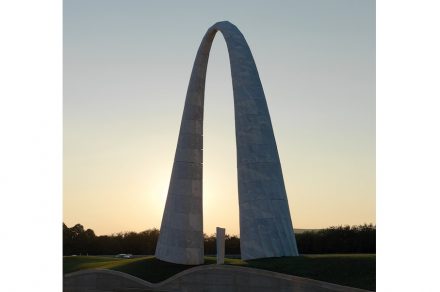 The stone branch is coming of age. Just as children fly the coop and make their way through life on their own, so are some stone designers turning away from their role-models of the past.

Forerunners of this new development originate from Italy, most prominently Raffaello Galiotto. From 2015 to 2018 he coined the Italian Stone Theater in Hall 1 of the Marmomac Trade Fair, where experimental ideas for working natural stone were the object of the exhibit.

Now Galiotto has converged his ideas and experience in a monumental work entitled „Arcolitico“. The piece is an oversized marble arch which poses as a landmark opposite the distribution center of Margraf Company in Gambellara near Verona. The arch which towers some 15 m high, cannot be overlooked by motorists on the nearby highway.

The arch is something of „a door towards the next age in the history of stone“ according to the description.

It is an ambitious statement. Let us check for proof of the pudding.

Arcolitico demands attention not because of its sheer size. The ancient Egyptians built monuments of greater dimensions, and the bridges and arches erected by the Romans demonstrate that they were able to negotiate building arched stone shapes.

But, Arcolitico is different i.e. because a minimum of material was used to realize it, and also because decorative grooves adorn its surface, the likes of which could not have been crafted by hammer and chisel.

Once again, Galiotto has driven the diamond wire and CNC-machine to the limit of its feasibility. This combined with a clever supporting steel structure on the interior of the arch, which is, of course, hollow, makes for a remarkable feat of design.

Calculating the static requirements of the arch was a feat in itself and required the help of a computer to complete.

Here the natural stone designer is at once an engineer. 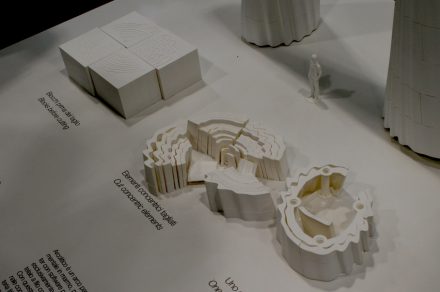 The principle for building a stone arch is quite simple. One block begets the next. A mere 4 blocks were needed to build Arcolitico.

Galiotto is quick to stress that the invention was not his but rather that of Angelo Mangiarotti (1921-2012), who, in constructing „Cono Cielo“ in 1989 used only one raw block to cut all pieces for the 10 m-high column from one single raw block.

This type of construction is far from the traditional stone sculpting where a single piece is chiseled from one raw block. Michelangelo said that he saw the sculpture within the stone block and needed merely to take unneeded pieces away.

Along comes Galiotto, stands self-assured and full of awe before Michelangelo’s David, admires the work, goes home and does something entirely different – with the new tools at hand.

In the end, it is not merely Galiotto’s method of work but also the result, which parts from tradition because there is no waste. In Galiotto’s opinion, material of this age, having taken millions of years to cure, must be treated with more respect. His method of hand-in-glove production is one way of minimizing waste.

He also gives the surface a relief: here ridges which could not have been realized with traditional tools add an interesting lightness to the mammoth structure.

Here the designer is once again an artist.

Galiotto calls this work principle „recomposition“ what is left of the block when the desired shape has been removed. It is the starting point for the next piece.

The trick is that the diamond wire cuts, whereas the hammer chips.

We will discuss recomposition in greater depth in a subsequent issue. 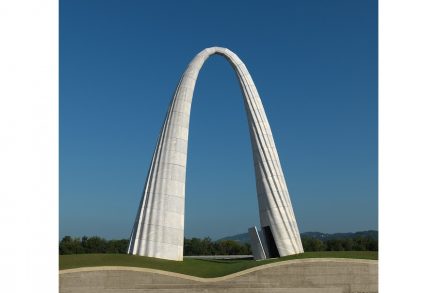 The construction of the door, providing access to the hollow interior, is also an unusual idea: it is guided along the ground as can be seen in the video.