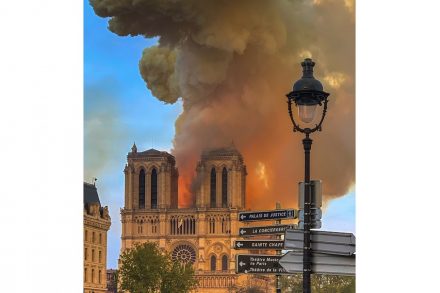 Update: Science magazine has a report that goes very deep.

The Cathedral of Notre Dame and the Parisians seem to have been escaped the worst: the limestone of the two striking towers and the aisles have not lost their stability. This was announced by the French Minister of the Interior.

Under extreme heat over a longer time period, a chemical reaction can take place in limestone causing the loss of its stability. Apparently, however, the flame inferno only destroyed parts of the roof truss and a wooden spire.

Large parts of the French capital had been built in limestone Calcaire Lutétien. The title for this natural stone bears the Roman name for today’s Paris, Lutetia. The stone had been quarried in the Paris basin on large scale and also transported to more distant constructions, such as the Roman thermal baths of Cluny.

It is very bright („pierre blonde“), hard and resistant, however may easily be worked and quarried also in larger blocks. It originates from marine deposits about 48 to 40 million years ago.

When the cathedrals were built in France since the 12th century (1163 Notre Dame de Paris was begun), a conflict came up between agriculture and the stone sector: should the ground be used for the cultivation of foodstuff or for the extraction of building material?

The quarriers partially had to go underground.

The testimonies of this are still to be found in today’s Paris, for example in the Rue de la Tombe-Issoire, where after the 14th century an underground quarry turned into a burial site and an ossuary. Parts of the old catacombs can be visited by tourists.

The demand for building stone was so high that in 1665 the Sun King Louis XIV entrusted his Académie Royale d’Architecture with detailed studies of the limestone deposits. 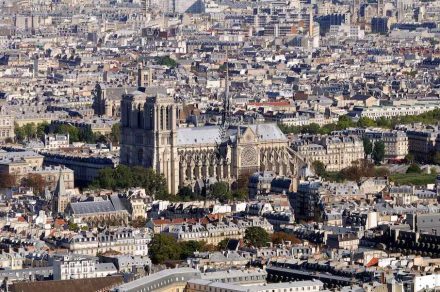 Like any other material, limestone can withstand extreme heat only for a limited amount of time, even if it does not catch fire itself. In this case, this is because the energy triggers a chemical process in the stone that continues from the outside in and ultimately destroys the stability.

It is the process by which so-called quicklime was once produced. It was the mortar for many centuries until today’s types of cement came up. In this case, fire transforms the CaCO3 into CaO via the intermediate step of Ca(OH)2.

The final product can be mixed with water („slaked“) and then works as a binder for brickwork, for example.

Since the energy of the fire is partly chemically stored in the CaO, slaked lime gets really hot when mixed with water (when the reaction is reversed).

To weaken the structure of limestone, one needs much energy. The Norwegian geo-archaeologist Per Storemyr from the University of Bergen has recently rebuilt an old kiln. In an experiment, it took a few days at over 900 degrees to produce quicklime. The amount of wood that was burnt had been huge, Storemyr writes on his webpage.

Meanwhile, offers from many French citizens and foreign politicians have been made to support the rebuilding of Notre Dame. Sympathy was also expressed by officials of the Jewish and Muslim religions, as far as we learned from the media.

By the way: in front of the main portal of Notre Dame is the Point Zero, a round stone where all the Routes Nationales (trunk roads) of France begin.