Helaine Blumenfeld: „marble as a means to show our spiritual side“ 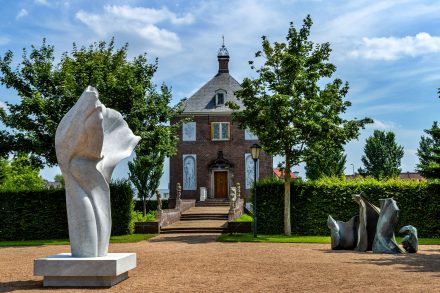 American sculptress Helaine Blumenfeld OBE has a passion for white marble. „For me, beauty is the starting point and the ending point… I want to show the beauty of marble which is so often in it’s translucency. When you see a heavy block of marble you feel it has weight. When you see marble the way I carve, it seems to be flying. And that’s always been my vision, to somehow take this beautiful marble and show the light through it. Because my work is very much about light, it has another dimension to it,” she is quoted in the folder for her exposition at …

The exhibition „Helaine Blumenfeld at Huygens’ Hofwijck“ during summer 2019 represents a broad retrospective, boasting works from the period 1985 to 2019. The selected objects display great diversity. 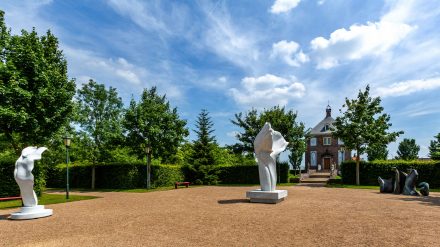 For instance, the majestic group of three marble sculptures „Mysteries“, „Spirit of Life“, and „Meridiana“, which are displayed on and around the terrace in front of the house, together with the bronze sculpture „Tree of Life“: „Many of the pieces in this show have to do with the idea of spiritual transformation… The idea is that we as human beings have a spiritual side and if we reach for that instead of being drowned by the material side we can achieve so much more within ourselves,“ she once said. 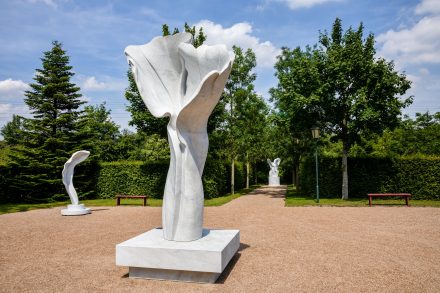 Helaine Blumenfeld works in Cambridge in England and in Pietrasanta using marble and bronze as her preferred materials. Some of her large-scale sculptures are more than man-high, and create organic shapes. Sometimes they are so wafer-thin as to defy the material’s hard nature. Helaine Blumenfeld was awarded an honorary OBE (Order of the British Empire) by the Royal British Society of Sculptors in 2011

Huygens’ Hofwijck is in Voorburg, The Netherlands, near The Hague. The gardens were designed and built by Dutch poet, composer and art lover Constantijn Huygens in 1642.