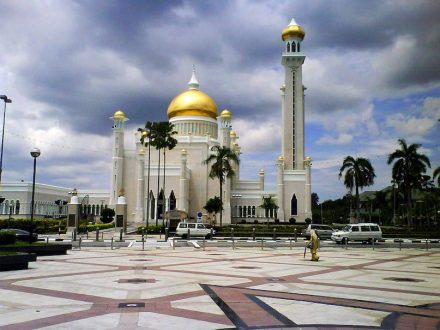 Islamic Conference of Culture Ministers is bestowing the title for the Arab Region, Asia and Africa

The European Union is not the only region to bestow the title of Cultural Capital of the year. The Islamic world also gives the title of „Capital of Islamic Culture“ to selected urban regions each year. The competition is sectioned into the regions Arabia, Asia and Africa. The committee making the selection is Islamic Conference of Culture Ministers.

The editors of Stone-Ideas.com did a bit of research to find out if there was anything worth reporting re.: natural stone in these cities as we have been doing as a matter of course for the European Cultural Capitals.

In the Asian Region: Badar Seri Begawan
Badar Seri Begawan is the capital Brunei, officially Nation of Brunei, the Abode of Peace (Negara Brunei Darussalam.) The Sultanate is situated in the northern region of the Malay Island of Borneo and once was the strongest political force in the region. Today it is known mainly for its extensive petroleum and natural gas fields which make it one of the wealthiest regions on Earth. It has an estimated population of 420,000 according to Wikipedia.

The literally most prominent building is the Sultan Omar Ali Saifuddien Mosque which towers above the capital with its dome clad in pure gold. The highest minaret is, according to tourist guides, clad in Carrara Marble.

The interior, too, shows ample Italian marble on walls, floors and pillars. This is probably due to the fact that Italian architect Rudolfo Nolli (1888-1963) played a major role in designing and building royal palasts and houses of worship in the Far East. The Omar Ali Saifuddien Mosque was built from 1954 to 1958. Granite from Shanghai was also implemented.

The current Sultan had another mosque built near the capital: the Jame’Asr-Hassanil-Bolkiah-Mosque.
Many tales accompany Sultan’s Palace: it is said to comprise 1800 rooms and is open to all citizens of Brunei at the end of the month of Ramadan. 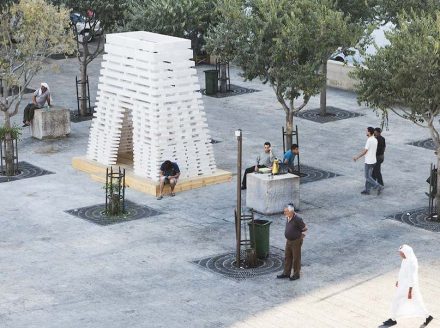 Arab Region: Al-Quds (Jerusalem) and Tunis
The local yellow limestone is the predominant stone in the entire levant from Lebanon to Egypt. Visitors are spellbound by the golden light the cities are bathed in. Architects Elias and Yousef Anastas of AAU Anastas, which entertain offices in Bethlehem and Paris picked up on the tradition. We had reported in previous issues:
* The „Stonesourcing Space“ in Bethlehem‘s Nativity Square is inspired the ancient vault in the landscape which animal herders used as a shelter in bad weather (1);
* „Stonematters“ was a self-standing stone vault used as a meeting point for citizens of Jericho (2);
* The new courthouse in Toulkarem is clad in the same stone (3)

Of course, the nomination of Al-Quds is also a political statement: the country, in which the city is situated is officially the Region of Palestine, but Jerusalem is controversially divided between Palestine and Israel.

The fact that this year a fourth award was bestowed to Tunis is an exception and owed to its role as host city of the 11th Conference of Culture Ministers.

African Region: Bissau in the Republic of Guinea-Bissau
No information about stone buildings available.