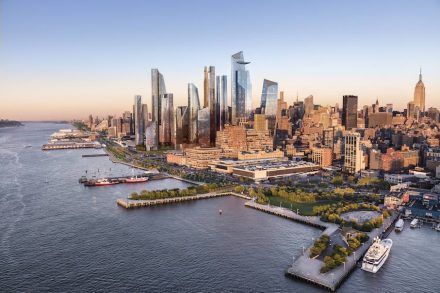 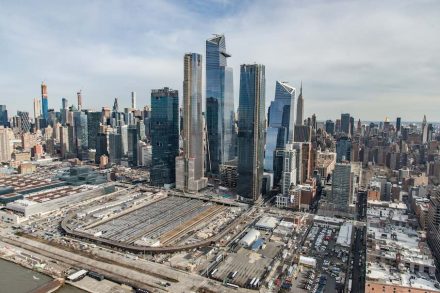 The project is one of superlatives in building for which New York is famous. World-wide coverage in the press and other media in March 2019, on the opening of a section of the Hudson Yards, a new district on the West Bank directly on the Hudson River. It was built on the bed of the old railroad tracks and accommodates no less than 16 skyscrapers and other spectacular complexes. 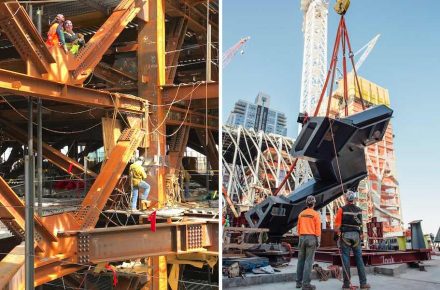 Let us concentrate on one sky-scraper that caught our attention, namely at 35 Hudson Yards. It was summarized in a press release about the entire project as „glass-and-limestone tower“. The stone was provided by Franken-Schotter of Germany – a calling of superlative dimensions: 800 m³ Jura Limestone was needed and set in 23,000 prefab window elements in aluminum, glass and stone.
The building towers 308 m into the sky with a total of 78 stories and is one of Manhattan’s tallest. 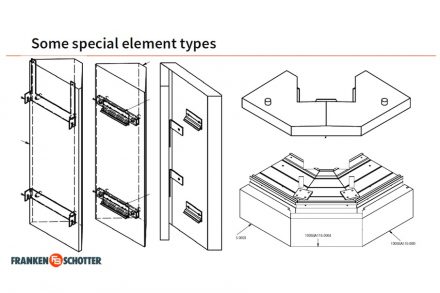 Not only the sheer magnitude of the stone was unusual. Some of the façade elements were unusually complex in shape and construction making special processes necessary.

For Franken-Schotter this was the biggest contract to date, and it gave them a point of reference to focus on such projects in the future. „Maximum Integration“ is the term for such contracts. Franken-Schotter’s Jonah Wurzer-Kinsler explains: „From the quarry till delivery of the façade elements at the building site, everything was in the hands of one contractor – ours“.
In this way, costs can be kept to a minimum making European suppliers competitive despite high labor costs and stringent environmental restrictions.

Provided the coordination with third parties is well coordinated. More on that later.

The choice of natural stone for the façade by architects David M. Childs/Skidmore, Owings & Merrill (SOM) was pivotal on two distinguishing factors of the material: for one, it helped the landlord obtain the coveted LEED-Gold certification for sustainability, and Franken-Schotter was able to boast its EMAS-Certification, giving the complex additional LEED-Points. 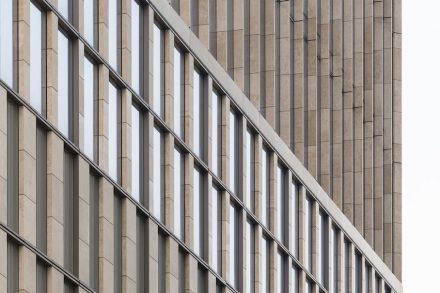 On the other hand both materials played an important role for the design: visitors walking around the building see the duo of glass and stone as different from every angle. From the front, 35 Hudson Yards looks like a glass tower, from a side angle like a stone building. From the inside there is a feeling as if it is made entirely of stone. 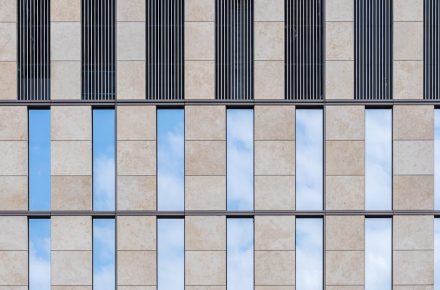 The natural stone slabs cladding the plinth are mounted flush to the façade. 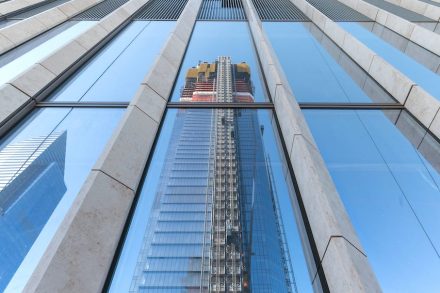 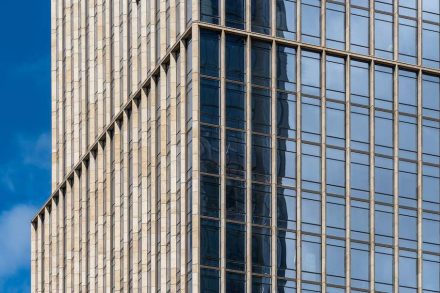 Above, they protrude with triangular shapes out of the surface. 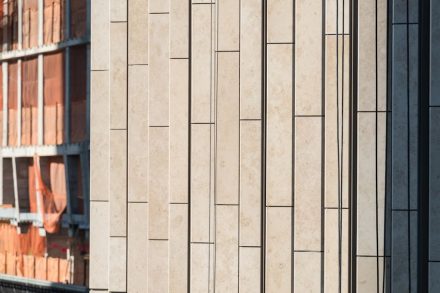 This livens up the façade and lends an air of buoyancy, but it also implies higher costs: from apartments high up in the tower, one looks directly upon the outcrops, so only the best, first-class material could be used.

As for the colors, the architects had originally planned on a play between light and dark nuances. But moving forward through the steps to production of the façade elements the landlord decided to reduce the spectrum: a uniform appearance and the avoidance of a checkerboard pattern was desired.

As is usual in such cases, the architects chose the desired hues at the production site. Three visits were needed: first the raw slabs were inspected, then the cut and finally the assembled elements. 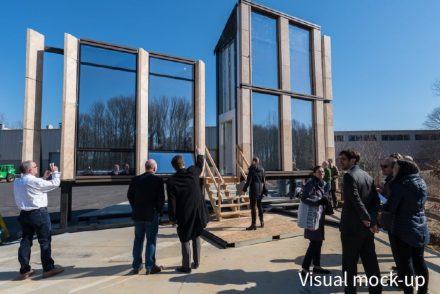 Finally, a visual mockup was assessed which was the basis of interaction of glass, stone and aluminum in various lightings. This last inspection took place on the site of Linwood Company, Pennsylvania, who oversaw assembly later.

There was a performance mockup in which the samples of the slabs were exposed to weather in a wind canal under storm and sleeting rain conditions. 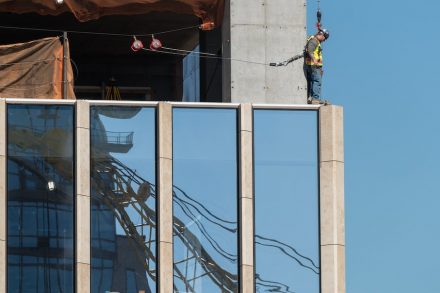 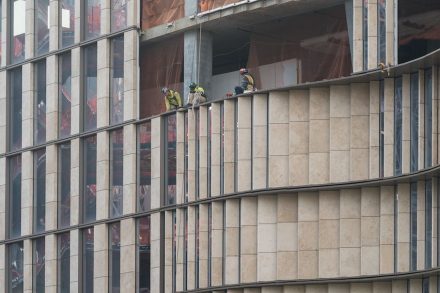 This was true for logistics as well. There was no storage space for the elements on site, so all elements had to be mounted directly upon delivery. Note that the pieces first had to be shipped to Bavaria by rail or truck to the ports of Hamburg or Bremerhaven from where they were transported to the USA by ship and there by truck to Pennsylvania and finally to the building site.

Some impressive facts and figures:
∗ Tolerance of +/- 0,7 mm was allowed in every direction,
∗ A maximum of 130 natural stone elements were to be finished each day,
∗ In the dimples (the set back elements above the entrances on two sides of the plinth) each element has a unique shape to lend an air of unfolding pleats.

But back to the beginning of our article where we write of the spectacular side of Hudson Yards.

One of the skyrises has the highest observation deck of all Manhattan what with a glass balcony and next to it an interactive work of art comprised of steps, called „The Vessel“. Of course, the complex is a lifestyle and has everything one could desire, as said in the already mentioned press release: „The residences, which begin on the 53rd floor, offer their own suite of luxurious features and amenities: sweeping, panoramic views, interiors by famed designer Tony Ingrao, priority reservations at the in-building restaurant, Electric Lemon, by Stephen Starr (with round-the-clock in-residence dining services), residents-only private fitness center and meditation room, billiard lounge, golf simulator lounge with minibar, boardroom and private office suites, screening room, library, private dining room, children’s playroom and an event space that can seat more than 50 guests.“

But there are also critical opinions, e.g. voiced by the New York Magazine whose reporter wrote: „Hudson Yards is a billionaire’s fantasy city and you never have to leave — provided you can pay for it.“ 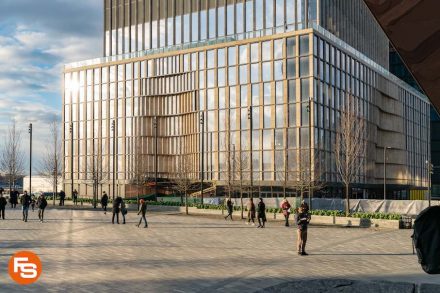 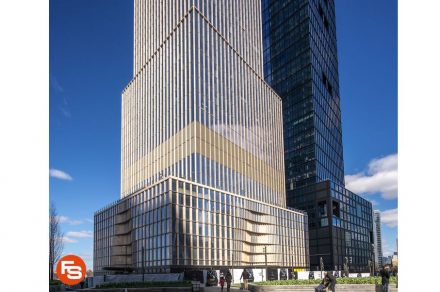 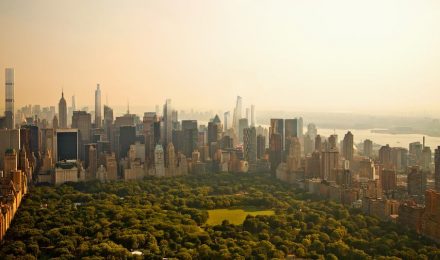