Euroroc’s General Assembly at Marmomac surprised all with its verve 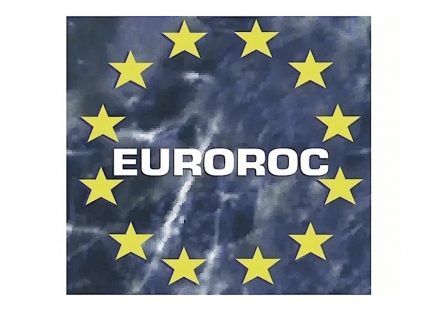 There were all of 3 new participants at this year’s General Assembly of Euroroc, the umbrella organization of the European National Stone Organizations: Sini Laine is the new Executive Director of the Finnish Organization and introduced herself as did Herman Graser of the German Organization who will take over the chair as President of Euroroc next year, and finally, the Turkish Organisation IMIB as a new member represented by Akan AK, department manager of the minerals sector.

Perhaps it was the new faces that brought verve into the event (held at Mamromac 2019) which showed a mood of invigoration.
Or: Perhaps it was a reaction on the work of the two Euroroc Presidents from Belgium. Reports by Stijn Renier and Kristof Callebaut near the closing of the duo’s first year had a lot to show. We recall: in an interview with Stone-ideas.com in September 2018 at the beginning of their two-year presidency they had announced that they would address „communication and cooperation“ as the central themes of their members.

The results are reason for pride not least because Euroroc has limited financial means and not even an office to call its own. Only Professor Gerd Merke acts as Secretary General.

Some of the results of hard work were the new Webpage of Euroroc, Facebook presence and work on the „Virtual Teams“. The latter is an idea born by Renier and Callebaut aimed at facilitating a cooperation for experts from all of Europe to work on common themes from afar. In the last year stone testing and CE-Mark were topics worked on.

Cooming virtual teams will be working on questions of marketing and safety of working conditions, they announced.

Accordingly, they challenge delegates to fill the organization’s webpage with substance and life. The columns to be filled are „Publications“ and „Knowledge“ and are awaiting contributions by Euroroc-Members. The multilingual diversity among members is no hurdle, translation programs are available and offer a high quality of translations. 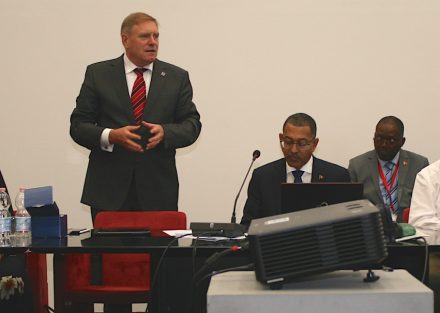 The following points of the General Assembly are noteworthy in bullet-point-format:

∗ Quartzite fine dust at the work-place is a major theme in the branch. Reports from Australia and Spain where employers face legal action, are on the table;

∗ A new theme revolves around ISO-Standards: The Agglomerated Stone Manufacturers Association (AStA Worldwide) petitioned for a unified standard for its engineered material as well as for natural stone. Jim Hieb of the US-American Natural Stone Institute (NSI) visited the General Assembly in person and appealed to delegates to apply pressure upon their national institutes for measures disallow setting both on equal footing. A straw pole of delegates resulted in equivocal rejection of the AStA Petition;

∗ Themes of sustainability are of interest in a number of articles: The EU-Commission set focus on the circular economy; in Finland has enacted a new law by which all products must post their CO² footprint within 5 years. On the day of Euroroc’s General Assembly Italy held its Fridays-for-Future-Demonstrations with an estimated one million participants all over rthe country. The stone branch asked if it could use the movement to underscore its position; It is becoming increasingly difficult all over Europe to acquire licenses for quarries. The situation in Greece is particularly precarious;

∗ A lecture from Norway informed listeners on Scandinavian Quartzites and their particularities;

∗ Angola intends to market its natural stone internationally: The minister announced the first International Conference and Exhibition of Ornamental Stones in Lubango city, southern Huila province which was held from October 24 to 26, 2019, as well as the International Mines Fair in Luanda from November 20 to 21, 2019.