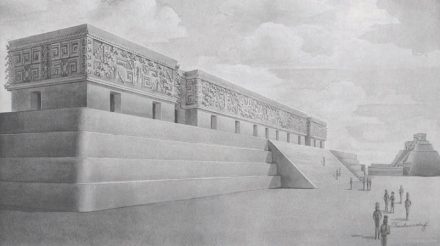 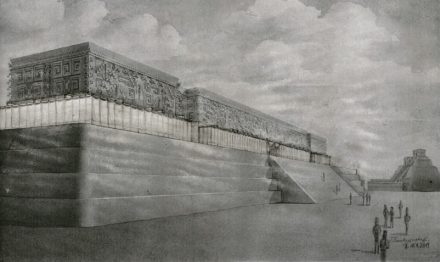 The great Temples and Palaces of the Mayas looked quite different at the height of the Mayan cultural era: not at all like we imagine them today. „All around the monumental stone core the ground floor was enshrouded in drapery swaying in the wind“, according to Jan Pieper, Professor Emeritus for Architectural History at the RWTH Aachen, Germany as told in a research report published in Academia.edu. Graphically he describes it as „enshrouding the building complex“. The cloth banners could have served a variety of purposes.

The Mayan Indians were prominent in Central America from around 3000 B.C. to 900 A.D. Temples and Palaces are known today particularly in the Yucatán peninsula of modern-day Mexico, all of which are situated atop elevated ground. The steps leading up to the buildings is a typical and impressive characteristic.

The buildings had but a few stories and no windows. The interior rooms were small and probably cold and dank. Experts have long speculated on whether people actually inhabited the spaces.

A lot of research had been done 1920’s and 1930’s when old Mayan culture was fashionable. Perhaps the most well-known example of the Art Deco architecture known as „the Mayan Revival“ is Frank Lloyd Wright’s Ennis House in Los Angeles. It was also the time when the reconstruction drawings of the Palaces and Temples, as we know them, were made.

Pieper took a closer look at some of the characteristics of the Mayan architecture within a research project funded by the DFG (Deutsche Forschungsgemeinschaft): the buildings have small square holes just below the cornice all around and in regular intervals. 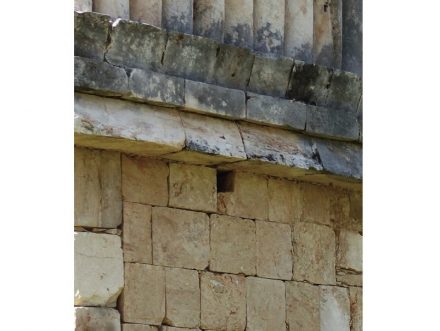 They were thought to be air vents since they extended through the walls of 1 m thickness and more.

But on closer inspection the orifices show traces of mortar and often imprints of tree bark on the mortar.

Pieper and his team of scientists from various faculties came up with a theory: the holes served as anchors for beams unto which drapery was attached.

First hints of this type of enshrouding were discovered on painted Mayan vases and pottery where occasionally cloth banners akin to reefed sails decorate the rim.

They are never seen hanging full length – but no wonder: the artists wanted to show not the drapery but what was going on behind the curtains.

The log also includes a scene in which a Mayan Kazike (Chief) deliberates with the Conquistdores seated behind a curtain. 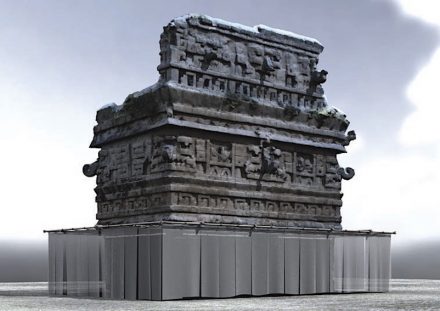 The team of scientists compiled a number of conclusions from details gathered on site, e.g. that the orifices were first filled with mortar, then the roughly chiseled beam was inserted, and more mortar was packed around the beam thus producing the imprint of tree bark.

Note also the distance between the orifices: exactly 67 cm which equals the width of the weaving looms of the Mayans.
Also fitting in the scheme of the theory: the buildings had no décor around the ground floor, but above they have.

There were sufficient trees in the Mayan realm: tropical rainforests trees have no branches to speak of. They grow straight and tall so there was no lack of beams.

The beams carried drapery, which, according to Pieper, was probably woven from valuable material. The drapes could be drawn forward and all the way to the ground.

The cloth measured over 3 m or more and provided an extra space or room „which could be used 9 months of the year“ according to Pieper. The space had daylight and ventilation but was protected from unwanted spectators.

For the remaining 3 months of the year, the drapes could be removed and stored to protect them in the hurricane season. The seafarers mention the harsh weather conditions. 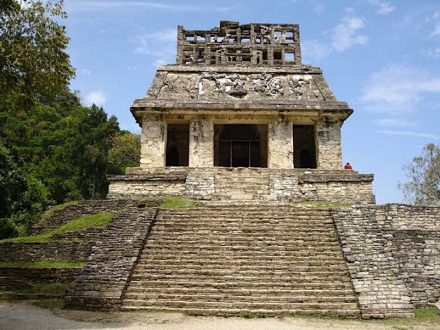 There were also less elaborate constructions for attaching the drapes: eyelets were worked into the walls unto which the cloth could be directly affixed. Where this is the case, there were wooden posts all in a row adjoining the let-down drapes.

Pieper concludes: „Mayan architecture has not only a stone side but a textile one as well.“ They stood in contrast to one another: the former hard and cold and the latter light and breezy.

In the course of the Mayan Era construction changed, according to Pieper’s theory: the lengths of cloth were probably originally used in common dwellings but were later used for the temples in an opulent form. Possibly they served to hide the ceremonies from the eyes of the common folk.

There was a similar development in the antique temples of Europe albeit in reverse order: „Pillars were part of religious complexes and later were incorporated in every-day architecture.“

Pieper dismounts all that is holy to historians with his new theories: just as we now know that marble buildings of the antique were not stone-faced façades but rather painted stone, the Mayan architecture as we know it, has been literally uncloaked as only part of the story.

Architecture in combination with stone and textile is known today from a number of hot regions.