Dr. Carlo Montani made his case for developing synergy not competition from artificial stone 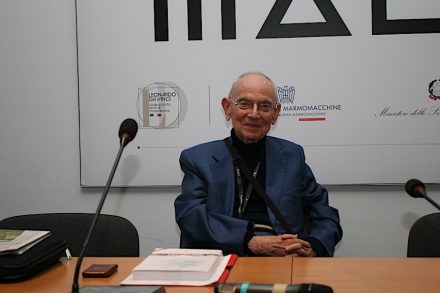 At this year’s Marmomac, the founder of natural stone market statistics presented the 30th edition of his yearbook

But at this year’s presentation, one of his thoughts was disturbing, i.e. the increasing proportion of engineered stone and quartz composite materials in the world markets. Montani made a case for laissez-faire and added that, after all, the competitive materials are made up of 90% stone meal – so the question is: can the „competition build synergies?” he asked.

By this he meant that the materials could be propagated as brothers of a kind, yet different.

Here are some of the analyses of his Statistical Yearbook:
* Global natural stone production was up +0.8% in 2018 to 313 million t (116 million m³) of which 90 million t were transformed into finished products. For years now, Montani has bemoaned the high proportion of waste and squandering of natural resources;
* Globally, stone quarrying has experienced growth of 30% per year on average during the last half century (whereby the leadership of the European countries has shrunk considerably);
* He urged the branch to increase investment and strive for modernization of antiquated machinery not only on a private level but also with regard to state subsidies and investment for infrastructure and transportation;
* Overall he sees the stone branch as one which renders high profits for low investments, reason for developing countries to establish a presence in the branch.

Shifts among the big players in the branch were evident according to Montani:
* already in the previous year, China had to cede first place to India as biggest exporter of raw stone (by tonnage). Note that the greatest portion of India’s exports of raw blocks (granite) goes to China;
* Italy’s value/t of exports is far ahead of the competition, but by tonnage the country experienced a serious recession falling back to levels below those of 2009. The recession was even more pronounced regarding imports;
* Iran was able to increase its exports in 2018 considerably. Turnover for finished products was 420.000 t equaling 160 million US-$. Buyers were mostly Asian as well as Iraq and Turkey. In Europe and in North America its presence was negligible;
* Turkey suffered from China’s recession in imports. But 80% of Turkey’s exports in tonnage are nevertheless destined for China. In a comment Montani pointed to the fact that Turkey also sells lower quality stone and cast more light on the lamentable profits/t achieved.